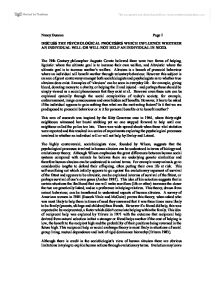 DISCUSS THE PSYCHOLOGICAL PROCESSES WHICH INFLUENCE WHETHER AN INDIVIDUAL WILL OR WILL NOT HELP AN INDIVIDUAL IN NEED. The 19th Century philosopher Auguste Comte believed there were two forms of helping, Egoistic: where the ultimate goal is to increase their own welfare, and Altruistic: where the ultimate goal is to increase another's welfare. Altruism is a branch of prosocial behaviour where an individual will benefit another through voluntary behaviour. However this subject is an area of great controversy amongst both sociobiologists and psychologists as to whether true altruism does exist. Examples of 'altruism' can be seen in everyday life - for example, giving blood, donating money to a charity, or helping the ill and injured - and perhaps these should be simply viewed as a social phenomenon that they exist at all. However even these acts can be explained cynically through the social complexities of today's society, for example, embarrassment, image consciousness and even hidden self benefits. However, it has to be asked if the individual appears to gain nothing then what are the motivating factors? Is it that we are predisposed to prosocial behaviour or is it for personal benefits or to benefit another? This area of research was inspired by the Kitty Genovese case in 1964, where thirty-eight neighbours witnessed her brutal stabbing yet no one stepped forward to help until one neighbour called the police too late. ...read more.

Alongside parenting influences is the more obvious factor that a warm, friendly community or environment encourages more helping responses than a cold, impersonal environment, for example urban environments. Research has also shown that those who help tend to ne more confident, happier, positive and more achieving people (Myers 1992). if we ourselves have experienced the same or similar stressful situation as someone in need we are more likely to show concern for them(Dovido and Morris 1975). "Altruism depends first on your liking and accepting others, second on our being concerned for others' welfare, and third on your feeling responsible for helping others in need." (E. Staub). Darley and Latan�'s Bystander Intervention Model (1970) is a theory that whether a bystander helps in an emergency is a result of a five step decision making process, where each step can result in the bystander failing to help. (1) Do you notice something unusual? One can't react to every unusual sight especially in today's environment where strange things are viewed almost everyday, this is known as the stimulus overload effect. If the situation was perceived to be unusual then certain ambiguities due to different social settings (for example a man lying on the pavement could be drunk, a tramp or physically heart) ...read more.

In conclusion, the psychological processes involved in whether an individual will or won't help a stranger in need are both complicated and varied. According to sociobiological principle of kin selection we are more likely to help blood relatives as this will increase the survival of our genes. Sociobiologists also explain that helping strangers can be put down to the act of reciprocity. However biology explanations aren't substantial enough in explaining why people help and one must take other factors into account such as the Audience Inhibition Effect, the Social Exchange Theory, environmental and social forces as well as abstract individual factors which can effect decisions at any one of the five steps in the Bystander Intervention Model. However the question still remains, Does true altruism exist? It is an unflattering view of humans that we only help when we can either gain benefits or the act can be reciprocated. Although it can't be denied that there are rare acts of altruism in humans and it is perhaps a miracle that they exist at all, for example the Christians who sheltered Jews during the Nazi Holocaust by risking their own lives, (London 1970). However it can't be denied that in most cases a human will help a stranger in need mostly when the cost to them is low and the benefits high. ...read more.