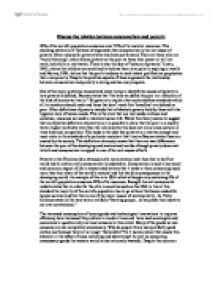 Discuss the relation between consumerism and poverty.

Discuss the relation between consumerism and poverty 20% of the world's population consumes over 70% of its material resources. This shocking statistic is at the basis of arguments that consumerism is the root cause of poverty. Other reasons for poverty have also been put forward. There are those who are "victim-blaming", whom blame poverty on the poor as those who cannot or will not work, lack skills or motivation. There is also the idea of "culture of poverty." Lewis, 1961, claims that children are socialized to believe there is no point in aspiring to wealth and Murray, 1984, claims that the poor's tendency to seek instant gratification perpetuates their own poverty. Despite the positive aspects of these arguments the relationship between consumerism and poverty is strong and has many aspects. One of the major problems encountered when trying to identify the causes of poverty is how poverty is defined. Bauman states that "the way we define the poor is a reflection of the kind of society we live in." He goes on to explain that society defines standards which all its members should reach and those that don't reach this 'breadline' are defined as poor. ...read more.

As Victor Gollance states in this way we are willfully "starving people...as we prefer their death to our own convenience." The increased consumption of luxury goods and technological innovations to improve efficiency have increased this problem in modern times and have lead sociologists and economics to question why we must consume to this extent. Many of the goods we can consume are also completely unnecessary. Why do people throw away perfectly good clothes just because they are no longer 'fashionable'? Is it human nature that causes this behavior or the affect of mass marketing and advertising? As well as consuming unnecessary goods the western world is also extremely wasteful. Despite the common belief that poverty, specifically world hunger, is caused by a global food shortage statistics show this is not the case and that the world produces 2,500 calories per day for every individual in grain alone. As well as consuming unnecessary goods the westernized world is also extremely wasteful. In the USA alone enough wood and paper is thrown away each year to heat 5 million homes for 200 years! ...read more.

One option to solving this 'problem' of the poor is to 'declassify' them. Bauman claims this is being done through the American 'Welfare to Work' scheme which is currently being undertaken by the New Labour government. This is the ides that the welfare state helps people into work with the aim of full employment. Whilst this sound like it would have a positive impact on the poor and the whole of society the reality is small and insecure wages in bad working conditions that are a poor substitute for the regular and guaranteed welfare support. The only outcome of this programme, its critic's state, is to make the poor 'disappear' by getting them into work they are taken out of the social register and the public eye. The relation between consumerism and poverty has many different aspects but at the core of all the arguments is the view that consumerism, although often ignored, is one of the major causes of poverty around the world. Poverty is a serious global problem and as the recent Ethiopia Food Crisis shows threatens the live of millions. The levels of consumption undertaken by the world's elite must be confronted if future crisis's of this kind are to be avoided and poverty overcome. ...read more.