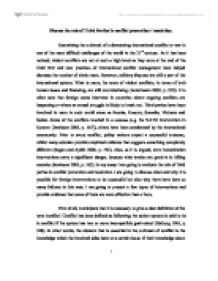 Discuss the role of Third Parties in conflict prevention / resolution.

Discuss the role of Third Parties in conflict prevention / resolution. Restraining the outbreak of a devastating international conflict or war is one of the most difficult challenges of the world in the 21st century. As it has been noticed, violent conflicts are not at such a high level as they were at the end of the Cold War and new practices of international conflict management have helped decrease the number of ethnic wars. However, military disputes are still a part of the international system. What is more, the costs of violent conflicts, in terms of both human losses and financing, are still overwhelming (Ackermann 2003, p. 339). It is often seen that foreign states intervene in countries where ongoing conflicts are happening or where an armed struggle is likely to break out. Third parties have been involved in wars in such world areas as Bosnia, Kosovo, Somalia, Vietnam and Sudan. Some of the conflicts resulted in a success (e.g. the NATO intervention in Kosovo [Jamieson 2005, p. 163]), others have been condemned by the international community. Prior to every conflict, policy makers expect a successful outcome, whilst many scholars provide empirical evidence that suggests something completely different (Regan and Aydin 2006, p. 736). Also, as it is argued, even humanitarian interventions carry a significant danger, because what armies are good at is killing enemies (Jamieson 2005, p. 163). In my essay I am going to evaluate the role of third parties in conflict prevention and resolution. I am going to discuss when and why it is possible for foreign interventions to be successful but also why there have been so many failures in this area. ...read more.

721-722. Another possibility should also be shown in addition to the extended-deterrence theory. It can be argued that it is not only the third-party defender that influences the actions of the attacker but also vice versa. For instance, at the beginning of the Serbian attack against the province of Kosovo, the United States' response was rather weak. However, following violent actions against civilians by the Serbian military, the NATO forces led by the U.S. responded in a much stronger way. In this case the foreign defender's reaction was affected by the attacker's actions. Similar examples include the Korean and Vietnam Wars, the Finnish Winter War in 1939 and the Seven Weeks' War in 1866. These examples provide an explanation how the third party's response can be influenced by the attacker's moves (Werner 2000, pp. 722-723). As I have mentioned, the United Nations have been involved in several foreign interventions over the past few decades. Some argue that the UN has been successful in their peace operations but many disagree saying that its interventions have either no or a negative influence (Diehl et al. 1996, pp. 684-685). There is no overall agreement on this issue but it is usually conceded that the UN has had some short-term success in intervening in international conflicts. However, even if it is true, it does not certainly mean that it is followed by a long-term attainment, i.e. prevention of potential future disputes (Diehl et al. 1996, p. 685). As the critics of the UN interventions say, there are studies which show that the UN involvement in conflicts is usually irrelevant or even counterproductive as it rarely leads to any decline of tensions between the disputing parties. ...read more.

262). In my essay I attempted to evaluate the role of third parties in conflict prevention and resolution. At the beginning I gave definitions of a conflict and a foreign intervention, and a few examples of types of intervention, which I thought was important before trying to answer the question. Then I argued that the United States is a power that often gets involved in foreign conflicts' prevention and resolution. Some claim that the extended-deterrence theory is an effective way of describing third-party intervention's effects. According to this theory, the attacker's decision depends on the third-party defender. However, it can be argued that it works the other way as well, i.e. the foreign defender's steps are influenced by the attacker, too. The United Nations is an organisation whose goal is to promote peace in the world and therefore it often intervenes in violent conflicts. Unfortunately, as the empirical evidence shows, its effects are rather mediocre. Many argue that the UN has either a counterproductive or no effect on conflicts, as it intervenes in a wrong way or at a wrong time. However, it is not only the UN which struggles with preventing and resolving conflicts. In fact, military and economic interventions usually end up as failures. As some argue, diplomacy is a more effective way of conflict prevention and resolution and, unlike military and economic interventions, it often decreases the duration of disputes. The last possibility of foreign intervention that I showed is a preventive war. It means attacking a state which could be a threat to the peace. However, it is very difficult for such an action to be justified and to satisfy the just war principle's requirements. ...read more.