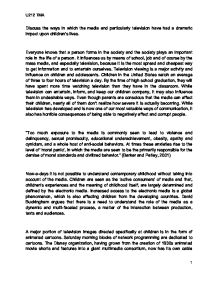 Discuss the ways in which the media and particularly television have had a dramatic impact upon childrens lives.

Discuss the ways in which the media and particularly television have had a dramatic impact upon children's lives. Everyone knows that a person forms in the society and the society plays an important role in the life of a person. It influences us by means of school, job and of course by the mass media, and especially television, because it is the most spread and cheapest way to get information and to entertain ourselves. Television viewing is a major activity and influence on children and adolescents. Children in the United States watch an average of three to four hours of television a day. By the time of high school graduation, they will have spent more time watching television than they have in the classroom. While television can entertain, inform, and keep our children company, it may also influence them in undesirable ways. Even though parents are conscious that the media can affect their children, nearly all of them don't realize how severe it is actually becoming. While television has developed and is now one of our most valuable ways of communication, it also has horrible consequences of being able to negatively affect and corrupt people. ...read more.

Later, however, each child was offered a reward for performing the response carried out earlier by the model. The addition of this incentive cancelled out the effects on imitative aggression of reward and punishment of the original model. Children in all three treatment conditions had apparently learned the model's behaviour equally well with reward acting as a facilitation for performance of these learned responses. Other studies also illustrated that children are more likely to model behaviour if they identified with the model and if the model had an admired status and the behaviour expressed had a functional value. (Bandura, 1969) These findings have direct bearing on the implications for the effect of violence shown on television. According to Neil Postman's book 'The Disappearance of childhood' (Postman, 1983) it is the electronic media responsible for the decline of modern civilization. He argues that television undermines the capacity to thinking critically and reduces politics, culture and morality to mere entertainment. In the past there was a time when alcoholism was seen only among adults, and not at all among children. Today it is common to see child alcoholics. The same situation exists among children for drugs and it is quite common among children. ...read more.

Incorrect information told on TV, which is accepted as true. In such way people form wrong idea about the events and the world in general that leads to misunderstanding and problems with other people. In such a way television can manipulate people giving us the wrong and incorrect information. Great number of p*********y, violence and horror in the screen can cause depression and provoke violence in the real life. Buckingham suggests that children's television defines children and childhood in particular ways; as such it is a reflection of adult perceptions. The media are important in changing the meaning of childhood, at one and the same time blurring and fixing the boundaries between adults' and children's cultural world. If children are constantly brought up in front of a television then reading habits are not instilled in them, and they are not encouraged to participate in outdoor activities. Only the world of television is their private world. Of course when television replaces human companionship there is also a good chance of the child being influenced by it. Young children cannot process the information which they are impacted by the television, same way as adults. They think that whatever they are watching is true and this may lead to the corruption of their minds if too much violence is viewed by them. ...read more.