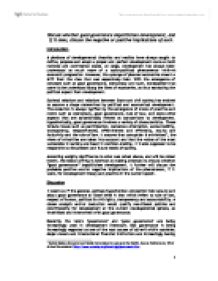 Discuss whether good governance depoliticises development, and if it does, discuss the negative or positive implications of such.

Discuss whether good governance depoliticises development, and if it does, discuss the negative or positive implications of such. Introduction A plethora of developmental theorists and realists have always sought to define, propose and adopt a proper and perfect development route at both national and continental scales. At large, development has always been understood as much more of a socio-political phenomenon vis-�-vis economic progression. However, the upsurge of planned economies meant a shift from the view that was expansively held. With the emergence of concepts such as good governance, democracy and such, development has come to be understood along the lines of economies, as thus extracting the political aspect from development. Societal relations and relations between State and civil society has evolved to assume a shape determined by political and economical development. The evolution is always typified by the emergence of mode of practice and norms such as democracy, good governance, rule of law, and some other aspects that are axiomatically viewed as concomitant to development. Hypothetically, good governance involves a variety of characteristics. These include issues such as participation, consensus orientation, accountability, transparency, responsiveness, effectiveness and efficiency, equity and inclusivity and the rule of law. It assures that corruption is minimized1, the views of minorities are taken into account and that the voices of the most vulnerable in society are heard in decision-making. It is also supposed to be responsive to the present and future needs of society. According weighty significance to what was raised above, and will be raised herein, the below writing is destined at making attempts to discuss whether "good governance" depoliticises development. ...read more.

Perhaps an important aspect to note is the belief that at times the hitherto greatest and most dominant theory of the prerequisites of democracy, are thought to be modernisation and/or development. The basic tenet of this view is that a general economic development, measure in GNP per capita, the degree of industrialisation, urbanisation, etc, should bring about an overall transformation of the society which, in turn, gives rise to a political change in favour of democracy. The sequence would be followed by a need for good governance to make democracy work. This analysis is ignorant of the fact that bad governance as personified in institutions such as corruption, is not a congenital trait of leaders in developmental states, but can also be attributed to the institutions of neo-liberalism imposed to mostly third countries. It is instructive to note that in Regions such as Africa, there were views that ruled out the possibilities of democratic rule because of modernisation or dependence exacerbated by Structural Adjustment Programmes. Because of limited resources and the manner in which neo-liberal policies were introduced, features such as corruption and/or bad governance were inevitable symptoms. For instance in Africa, the conflation of pre-colonial and traditional institutions of power and neo-liberal practices bred undesirable and perhaps counter development consequences. In order to address this, the West introduced good governance, which erodes the politics in development, noting past failures. In the good governance discourse, democracy emerges as the necessary political framework for successful economic development, and within the discourse democracy and economic liberalism are conceptually linked: bad governance equals state intervention, and good governance equals democracy and economic liberalism. ...read more.