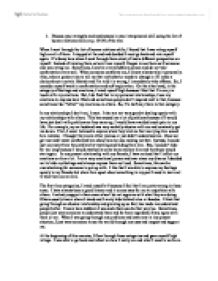 Discuss your strengths and weaknesses in your interpersonal skill using the list of human relations skills on p. 19-20 of the text.

1. Discuss your strengths and weaknesses in your interpersonal skill using the list of human relations skills on p. 19-20 of the text. When I went through the list of human relations skills, I found that I was rating myself high on all of them. I stopped at the end and decided I must go back and rate myself again. It's funny how when I went through them slowly I had a different perspective on myself. Instead of viewing them as how I see myself, I began to see them as if someone else was rating me. Sometimes, I can be a very stubborn person and do not take confrontation very well. When someone confronts me, I almost always take it personally. Also, when a person tries to tell me that my behavior needs to change or if I make a choice about a certain lifestyle and I'm told it is wrong, I immediately take offense. So, I consider myself weak in confrontation and self-exploration. On the other hand, in the category of feelings and emotions, I rated myself high because I feel that I'm very in touch with my emotions. But, I do find that in my personal relationships, I use my emotions to express how I feel and sometimes people don't respond well to that, because sometimes I do "inflict" my emotions on others. So, I'm half way there in that category. In my relationships I don't act, I react. I also am not very good at dealing openly with my relationships with others. This has caused me a lot of problems because if I would have just dealt with problems as they came up, I would have avoided much pain in my life. For example, my ex-husband was very verbally abusive with me and constantly put me down. First, I never listened to anyone when they told me that marrying him would be a mistake. ...read more.

I don't take confrontation too well and I have the tendency of exploding when someone takes out their insecurities on me. I just counted to 10 and said nothing at all. Now I just keep everything to myself. I need to change this by telling her how I felt when she said that to me. If I can do this it will be a big step for me because for once I would be dealing with confrontation and taking initiative to contact others. 4. Give an example from your personal life or from the group when you were able to confront someone in a responsible manner. Give an example of an irresponsible confrontation. An example of a responsible confrontation was when I confronted my ex-husband and told him I wanted a divorce. It took me three years to confront him about anything and it felt so good when I finally did it. I did it responsibly because I didn't accuse him of anything. Instead, we just talked and I told him how I felt and how he made me feel. Instead of saying "you do this" I would say "when you do this, it makes me feel sad". I wish I would have done this earlier in our relationship but it was too late, I was so emotionally scarred. The break up was easy and we remained friends. In my present relationship, I've been using that type of conversation and is has saved us from breaking up. One day, a girl was getting too friendly with my fianc�e and I quickly went over to her and confronted her. This is definitely an example of an irresponsible confrontation. I called her names and told her that she was being inappropriate. Needless to say, she got very offended and stormed off. I regret confronting her in that manner because it only made matters worse. My fianc�e got mad at me for making such a scene and I was upset with myself for acting so childish. ...read more.

Boredom is another way individuals resist the group. They may feel bored because they did not initiate their own interactions in the group. This next way that individuals resist the group is dealing in generalities. I find that almost everyone in the group does this. I generally use the words "you" and "people" instead of "I" even when I'm applying to myself. Individuals avoid being specific in the group. Instead of speaking directly to the one person in the group, individuals direct their remarks to the entire group. When conflict arises in the group, some individuals try to stop what is taking place by defending the confrontee. They find discomfort when conflict or strong emotion takes place. For example, when one of the members of the group was confronted about being too silent, individuals started defending her and made the confronter feel like the bad person. Some individuals refuse to take suggestions by the other members when they confront him or her. When someone suggests a possibility to change a certain behavior, the individual refuses to do so and refuses the possibility of moving towards growthful change. This is a form of resistance. Some people need to feel in control and they do this in order to resist the process of the group. Ways in which individuals may do this is by overtalking, silence, hostility or cynicism. These individuals need to control what is taking place in the group and what is not taking place in the group. 7. Pick an important relationship in your life that you believe could be improved. Write a script in which you demonstrate the skills of immediacy. Have the other person respond the way you really think they would-defensively, evasively, angrily, balmingly, supportively, empathically, etc..., while you continue to demonstrate Egan skills. 6 excerpts of dialogue, 3 for each person. Immediacy- I deal openly and directly with my relationships to others; I know where I stand with others and they know where they stand with me because I deal with the relationship. ...read more.