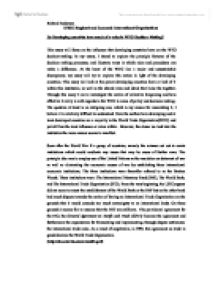 Do Developing countries have much of a voice in WTO Decision-Making?

Do Developing countries have much of a voice in WTO Decision-Making? This essay will focus on the influence that developing countries have on the WTO decision-making. In my essay, I intend to explore the principle features of the decision making processes, and illustrate ways in which rules and procedures can make a difference. At the heart of the WTO lies a major and unsustainable discrepancy, my essay will try to explore this notion in light of the developing countries. This essay will look at the power developing countries have or lack of it within this institution, as well as the shared aims and ideals that liaise the together. Through this essay I am to investigate the notion of collective bargaining and how effective it really is with regards to the WTO in areas of policy and decision making. The question at hand is an intriguing one, which is my reason for researching it, I believe it is relatively difficult to understand from the surface how developing and at least developed countries are a majority in the World Trade Organisation(WTO) and yet still has the least influence or voice within . However, the closer we look into the institution the more answer seems to manifest. Soon after the World War II a group of countries, namely the winners set out to create institutions which would eradicate any issues that may be cause of further wars. The principle idea was to employ use of the United Nations as the resolution on deterrent of war as well as eliminating the economic causes of war by establishing three international economic institutions. The three institutions were thereafter referred to as the Bretton Woods. These institutions were: The International Monetary Fund (IMF), The World Bank, and The International Trade Organisation (ITO). From the very beginning, the US Congress did not seem to resent the establishment of the World Bank or the IMF but on the other hand had much dispute towards the notion of having an International Trade Organisation on the grounds that it would concede too much sovereignty to an international body. ...read more.

(http://www.southcentre.org/publications/workingpapers/wp11.pdf) Examples of developing countries that have been invited are to the Green Room consultations include India, Brazil, Jamaica and even more recently Bangladesh. (Narlikar 2005, p47). Contrary to the equality that the WTO claims to grant to its members, most of the processes described above act as a double edged sword. Here onwards, I will evaluate serious problems of participation that developing countries face with these crucial pillars that WTO decision making stand on. Consensus based decision making not only deprives developing countries from making full use of the equal status that they share with their more developed counterparts as a result of the Agreement; in fact, at times it may be found to actively work to the damage of developing countries participation. Assuming that the country is present; the consensus-based decision-making procedure "ascribes considerable importance to having a permanent presence or, perhaps more accurately, an active knowledgeable presence" It is here that developing countries come into contact with a severe problem with the decision making process. (http://www.southcentre.org/publications/workingpapers/wp11.pdf) One of the various problems is the number of permanent delegations in Geneva. A recent study in 2000 found that 24 member countries have no permanent presence in Geneva. These countries do not have the ability to object to the consensus that different bodies the WTO arrive at in their everyday workings. Numerous developing countries find it challenging to attend the meetings of the WTO, particularly if they must also cover all the other international organisations in Geneva with their small delegations. The difference in representation between the developed and developing countries presents a vast disadvantage against developing countries and weakens their participation within the WTO. Moreover, consensus decision is conducted through open discussion and this poses another problem for developing countries. If a country wants to reject a proposal, it must do so openly and clearly in the presence of other members. Developing countries mentioned how they sometimes fear the consequences of expressing their objections publicly, and as a result choose the option of remaining silent. ...read more.

(http://www.southcentre.org/publications/workingpapers/wp11.pdf Nonetheless, perhaps more recently the situation is changing; Brazil has won a landmark victory at the World Trade Organisation that could spell the beginning of the end of rich countries' subsidy payments to their farmers. The WTO has ruled that $1.5bn (�830m) of annual subsidies given by the United States government to its 25,000 cotton farmers is mostly illegal. The provisional ruling is confidential, but trade sources said pubic confirmation would be available as soon as next month and could start a domino effect whereby much of the �300bn in subsidies lavished on the rich world's farmers might tumble. Analysts said, however, that, even if the US Congress agrees to scale back cotton subsidies, implementing the changes could take up to two years. But campaigners were not convinced. Matt Griffith, a trade policy analyst at the charity Cafod, said: "That Brazil brought this case is a sign of desperation that so little has been done to tackle rich-country subsidies. It sets a valuable precedent in an attempt to call the US and other lavish subsidisers to book." Oxfam spokeswoman Celine Charveriat agreed: "This would be a huge victory, not just for Brazil but particularly for 10 million poor African farmers whose livelihoods have been crippled by unfair competition." (http://www.guardian.co.uk/business/2004/apr/28/brazil.usnews) Ultimately, developing countries recognise that they need to somehow increase their Geneva presence, increase coordination between Geneva and their capitals, and increase interest, resource, and research commitments at the national level to allow more informed participation in the WTO. This acknowledgement of limitations of processes at the domestic level presents a remarkable contrast to the dismissal of the GATT as a 'Rich Man's Club' by developing countries in the past and their refusal to even try to participate on equal terms in the institution. Underlying this self-critique has been the recognition that it is up to the developing countries themselves to assert their voice in the WTO and represents the first step to empowerment. ...read more.