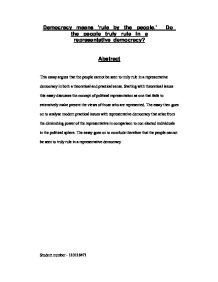 Do the people truly rule in a representative democracy?

The reason for this is that a representative can be elected on the strength of individual policies such as being nationalist. In a representative democracy this then also gives them the mandate to pursue other policies as they please regardless of whether this reflects those they represent. For example a candidate may get elected for his nationalist approach, but then may use this power to pursue socialist economic goals. Therefore the people who vote in a rational sense for their own individual and specific benefits cannot be seen to rule in this approach either. This issue of the freedom of the elected representative to act as they choose is one that has much scholarly debate. It is a point raised by Rousseau (1968, p.141) who argues that the people are "free only during election of members of parliament; as soon as the members are elected, the people is enslaved".Whilst the counter argument could be raised to this that government's are always concerned with what people think because they want to stay in power the next time there are elections, in reality it is commonplace for politicians to alter policies after being elected. Therefore to say that the people rule in such a system is incorrect. The people only rule in choosing who they want to rule them, as Schumpeter (1976, p.270) ...read more.

The effect the party system has on agenda setting is that it makes it easier because the power is generally in the hands of a few major groups who can dictate the nature of elections. Whilst it could be argued that a party system is unavoidable, in reality, there are always going to be individuals who agree in certain areas and disagree in certain areas and will use their similarities to their political advantage. Even in what is seen as the beacon of democracy of ancient Athens, Bonner (1961, pp. 45, 61) argues there were crude party organizations which allowed statesmen to ensure their majority. In the same way that parties set the agenda for the voter in who they vote for, they also set the agenda for the representative by forcing them to stick to party policy which is often influenced by individuals who are not elected. Therefore the strength that parties have in representative democracy is another factor that emphasises the argument that the people cannot be seen to rule. As has been shown in this essay, representative democracy is an approach to government which in very few senses equates to rule by the people. The numerous theoretical issues with representative democracy are accentuated by the modern problems surrounding the declining power of the representative. Whilst typically democracy is seen as a form of government by the people, in the case of representative democracy this is clearly not the case. ...read more.