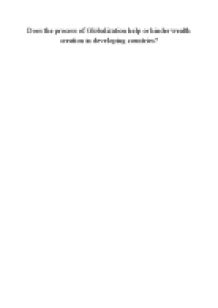 Does globalization hinder or help wealth creation in development countries?

International Migration and Emigration are seen in different ways by developed and developing countries. Due to fast population growth and growing unemployment, people from developing countries encourage more liberal migration policy. Because of industrialization, the number of skilled people requested by developed countries has grown up significantly, so people from developing ones prefer to move overseas for the hope of a better life. For example, at the 90s, over 300.000 Latin American and Caribbean professionals and technicians were living outside of their birth origin countries, mostly in the United States, where 12% of (Villa and Martinez, 2000) of those who hold a degree in science or engineering are foreigners, with a majority from developing countries (Pellegrino, 2000). However, in a long term run, immigration and emigration globalization can be seen as positive impact on developing countries because there is a potential opportunity that those skilled workers who left their countries will return home, therefore they will transfer their skills and knowledge back to the developing country. According to Vitez, one of the biggest positive effects of globalization on developing countries is free trade, where they are able to export and import without any governmental intervention. ...read more.

Importantly, by diversifying across more stocks you reduce the specific of holding individual stock and become more exposed to the market and economic. However, other writers also found evidence that shows how globalization is relevant to financial sector development. For example, Woochan and Wei (2000) identify that Brazil and the Philippines are countries who experienced higher returns because of stock market liberalization. Globalization facilitates international market The argument in the process of globalization go extra miles indicating that the effect of globalization on developing countries since it facilitate free trade and international markets. Brittan (1998) indicated the extent globalization led to the marginal increase of the world developed nations and the same time powered reduction in the developing countries, by citing Asian countries. For example, China has joined the globalised system much more enthusiastically, even though they joined it later than Japan, its trade in 2004 was equal to 70% of its GDP, and received $60.6 billions of foreign direct investment in that year, while Japan received only $20.1 billions. (Overholt, 2005). In conclusion, the essay had an overlook at the positive and negative effects of globalization on developing countries. In my opinion, the advantages of globalization, such as free trade, economic boost far outweighs the disadvantages. On the large scale, globalization has done more to improve wealth creation in developing countries than hinder it. ...read more.