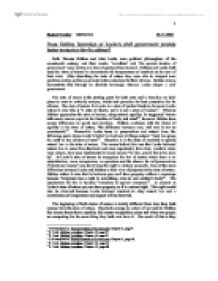 Does Hobbes Sovereign or Locke's civil government provide better protection for the citizen?

Student Number: 020544162 26-11-2003 Does Hobbes Sovereign or Locke's civil government provide better protection for the citizen? Both Thomas Hobbes and John Locke were political philosophers of the seventeenth century, and their works 'Leviathan' and 'the second treatise of government' were written at a time of great political turmoil. Hobbes and Locke both used the 'state of nature' to demonstrate the temperament of mankind as the start of their texts. After describing the state of nature they were able to interpret core problems within politics to provide better protection for their citizens. Hobbes tries to demonstrate this through an absolute sovereign whereas Locke adopts a civil government. The state of nature is the starting point for both texts and is therefore an ideal place to start to critically analyse, which text provides the best protection for its citizens. The state of nature for Locke is a state of perfect freedom, however Locke makes it clear this is "a state of liberty, yet it is not a state of license"1. Whereas Hobbes approaches the state of nature, using natural equality, he suggested "nature hath made men so equal in the faculties of body and mind"2, however Hobbes does accept differences in speed and reactions. Hobbes continues with the theme of equality in his state of nature, "the difference between man, and man is not so considerable"3. Meanwhile Locke turns to preservation and natural laws, the following quote shows Locke's belief in God and all things natural "God, has given the earth to the children of man"4. Therefore it is the duty of mankind to uphold natural law in the state of nature. The reason behind this was that Locke believed natural law to come from the heart and more importantly from God. ...read more.

Locke selects a different method; he stated, "I easily grant that civil government is the proper remedy, for the inconveniences of the state of nature"22. Even though both thinkers discovered flaws with the state of nature they still come out with different views. These differences are that Hobbes believes the state of nature to be awful and a return to it would be the worse thing that could happen. On the other hand Locke recognises the problems with the state of nature, but remains that the system of government needs an outlet whereby not all rights are surrendered for example "Government was not established as government by consent in such a way that the withdrawal of consent led to the disollution of government, but instead as a trust with the people free to resist and to reconstitute government only when it violated it's trust"23. Locke believed that God wanted mankind to unite in society, "God having made man such a creature, that in his own judgment it was not good for him to be alone, put him under strong obligations of necessity, convenience, and inclination to drive him into society, as well as fitted him with understanding and language to continue and enjoy it24. I interpret this to mean that Locke wanted a combination of decision makers and wanted to push for a more democratic system. Hobbes though wanted to be strong and provide security for his people, he mentioned, "getting themselves out of the miserable condition of warre"25. He believed in securing them to their contracts, and observing the laws of nature and by having an absolute sovereign the fear of punishment would tie them to that, "when there is no visible power to keep them in awe, and tye them by feare of punishment of their covenants and observations of those lawes of nature"26. ...read more.

The civil government represent the majority "when any number of men have so consented to make one community or government they are thereby presently incorporated and make one body politic, wherein the majority have a right to act and conclude the rest"37. Therefore if the government don't follow the wishes of the citizens they can act, therefore they can protect themselves better and their rights. Hobbes however would argue that the absolute sovereign is a supreme power, a mortal God who has been called upon to 'protect' people from each other. They have the necessary powers with which they can make peace and maintain it for example to punish those who transgress, make rules, protect competition, to "wart peace", and Hobbes believed if these simple powers shared then it would result in war, therefore it's totally based on security of the citizens. To conclude it's hard to support one argument, as both provide adequate support for their arguments. However the prediction I made nearer the beginning that Hobbes offers security and Locke offers rights has proven to be correct. My interpretation of protection must mean that not all power is surrendered and therefore I would argue that Locke provides the better protection. I do however recognise if you interpret protection differently you would say Locke doesn't offer this. Hobbes main flaw is that the sovereign receives all right from the subjects, meaning that the citizens can become at risk from the sovereign, and the sole aim of Hobbes writing would be failed as to dissolve the sovereign he would either have to die or a return to the state of nature, which Hobbes desperately didn't want. However with Locke the citizens get rights, which means they are protected from the government, outside invasions, each other and a return to the state of nature. ...read more.