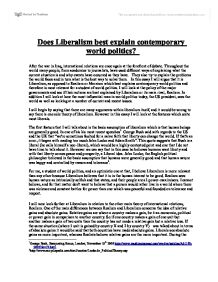 Does Liberalism best explain contemporary world politics? After the war in Iraq, international relations are once again at the forefront of debate. Throughout the world many people, from academics to journalists, have used different ways of explaining what the current situation is and why events have occurred as they have. They also try to explain the problems the world faces and in turn what is the best way to solve them. In this essay I will argue that it is Liberalism, as opposed to Realism or Marxism which best explains contemporary world politics and therefore is most relevant for a student of world politics. I will look at the policy of the major governments and see if their actions are best explained by Liberalism or its main rival, Realism. In addition I will look at how the most influential man in world politics today, the US president, sees the world as well as looking at a number of current and recent issues. I will begin by saying that there are many arguments within liberalism itself, and it would be wrong to say there is one sole theory of liberalism. However in this essay I will look at the features which unite most liberals. ...read more.

Liberals believe, as mentioned earlier, that through trade we will see peace due to the increased contact between the two nations and the cost of losing this trade. The idea of trade as a way to a better world, mentioned earlier is by no means a new idea and a student of international relations can look back to the 18th century when philosophers, from Adam Smith to Ricardo, to Locke and Montesquieu talked of the spread of trade to increase peace. Montesquieu in his book "The Spirit of the Laws" said "Two nations who traffic with each other become reciprocally dependent; for if one has an interest in buying, the other has an interest in selling; and thus their union is founded on their mutual necessities."7 Though wars still happen between trading nations, WWI being the prime example, it does make wars more costly as the benefits of trade will be lost, with this added cost comes less willingness to go to war. This leads on to the so-called "Democratic Peace Theory" which states that, "democracies do not go to war with one another"8. This Liberal idea is much debated and even if one disagrees with it, for a student of world politics it is an incredibly important theory as it effects policy. ...read more.

Therefore I believe Liberalism best explains why the British Government acted as they did. In my opinion it is Liberalism which explains current world politics most effectively. From humanitarian intervention in Kosovo, to refusing to do business with Burma, the policy of the US and the UK in terms of international relations is based on liberal ideals and values. In today's unipolar world, the liberal idea of absolute gains has, according to me, far more relevance than the Realist idea of relative gains and in my opinion to deny the influence of actors on state decisions would be na�ve. Therefore I believe it is indeed Liberalism which best explains contemporary world politics. Word Count: 2174 I 1George Bush, Banqueting House, London, November 18th 2003 http://www.washingtonpost.com/wp-dyn/articles/A61193-2003Nov19.html 2http://www.encyclopedia.com/html/section/Locke-Jo_PoliticalTheory.asp 3 The Costs and Benefits of Eastern Enlargement", R.Baldwin, J.F. Fran�ois and R. Portes, Economic Policy 24, 1997 4 Montesquieu, Spirit of Laws, bk. 20, CH. 1 On Commerce 5 George Bush Speech (see above) 6 Ibid 7 Montesquieu, Spirit of Laws, bk. 20, CH. 2 Of the Spirit of Commerce 8 Lectures of Shaun Breslin 9 George Bush Speech 10 "Lexus and the Olive Tree", Thomas Friedman, 2nd Editio Published 1999 11 IR Theory in practice, John Baylis http://www.oup.co.uk/pdf/bt/baylis/cs1/section02.pdf 12 Sydney Morning Herald 7th November 2003http://www.smh.com.au/articles/2003/11/07/1068013393985.html?from=storyrhs 13 Guardian article, May 1997 http://www.guardian.co.uk/Indonesia/Story/0,2763,190889,00.html ?? ?? ?? ?? ...read more.