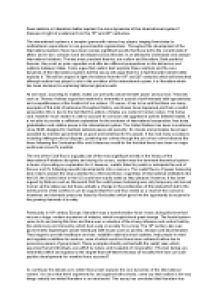 Does realism or liberalism better explain the core dynamics of the international system?

It has had many successes including settling territorial disputes, punishing war crimes through the use of war crime tribunals like those following the Cambodian War and it deserves credit for the fact that there have been no major world wars since it?s creation. The end of the Cold War is arguably one of the most significant events in the history of the International Relations discipline and during it?s course, realism was the dominant theoretical system in terms of providing an explanation for it, however, realists failed to predict or anticipate the end of the war and it?s following peaceful developments into a new era. The realist theory of power balancing does help to explain the clear potential for a third world war; regardless of international institutions like the UN, the Soviet Union or the US could have easily acted as they pleased. However, it has been argued by thinkers such as Moravcsik that the realist power balancing was only temporary and served to prop up the status quo but it was actually a change in the preferences of the state which led to the eventual end of the conflict. ...read more.

These examples directly contrast with the realist view, which assumes that all individuals are selfish by nature and incapable of cooperation. If human beings are inherently selfish and egoistic to the degree that self-interest trumps all morality then how can such positive developments for mankind have occurred? So continues the debate as to which theory best explains the core dynamics of the international system. It is clear that there arguments for and against both schools; some say that realism is the way things actually are whilst liberalism is an ideal world. This essay has concluded that liberalism has provided a more clear explanation than realism throughout the 19th and 20th centuries, however, international relations is a work in progress and as we continue to study the field, we will continue to ask questions about foreign policy and international issues in order to improve our understanding of the system today. Whichever theory one chooses to side with it is clear that they are both capable of providing robust and noteworthy explanations for the way the international system has worked thus far. ...read more.