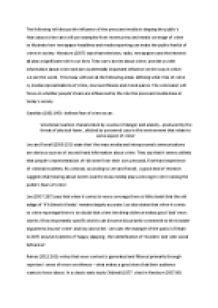 Does the media affect people's fear of crime?

﻿The following will discuss the influence of the press and media in shaping the public?s fears about crime and will use examples from recent press and media coverage of crime to illustrate how newspaper headlines and media reporting can make the public fearful of crime in society. Newburn (2007) says that television, radio, newspapers and the internet all play a significant role in our lives. They carry stories about crime, provide us with information about crime and are a potentially important influence on the way in which we see the world. This essay will look at the following areas: defining what fear of crime is, media representations of crime, newsworthiness and moral panics. The conclusion will focus on whether people?s fears are influenced by the role the press and media have in today?s society. Garofalo (1981:840) defined fear of crime as an: ?emotional reaction characterized by a sense of danger and anxiety?produced by the threat of physical harm?elicited by perceived cues in the environment that relate to some aspect of crime? Lee and Farrall (2009:153) ...read more.

Attitudes to crime are hugely influenced by newspaper reports, with tabloid readers almost twice as likely to be worried about crime as those who favour broadsheets ( Cozens 2003). Berger, Free and Searles (2005:4) talk about how a new genre of television crime reporting appeared on the scene: the tabloid-style infoainment. Shows such as Cops, Americas Most Wanted and Unsolved Mysteries. These programmes present ?true crime? stories that blur the traditional distinction between news and entertainment. They promote a ?shared disgust for anyone alleged to be a criminal? and serve to heighten our fear by suggesting that crime is all-pervasive. Newburn (2007) suggests that all media appear to exaggerate the extent of violent crime in Britain. Marsh and Melville (2008:40) say that ?Moral panic is such a well-established term, both in academic and everyday vocabulary, that it is surprising to recall it has only become widely used since the work of Cohen in the early 1970s on youth subcultures. Since then the term has been regularly used in the media to refer to all sorts of anti-social and/or criminal behaviours. ...read more.

Critcher cites 25 headlines referring to child abusers and paedophiles in one month in one newspaper, the Daily Mail. He cites a Daily Mail editorial, from 13 March 1998 arguing against the release of paedophiles, asking ?what kind of law is it that plays Russian roulette with the lives of our children??. By 2000, the coverage of paedophilia in the British press had reached unprecedented levels following the sexual murder of Sarah Payne, an eight-year-old girl who had been missing for two weeks. To conclude there is strong evidence to show that fear of crime is real and affects people?s lives. The way that the press and media portray crime stories does appear to have a direct effect on what the public think about society and the crime that surrounds them. The way that broadsheet and tabloid newspapers report their stories would seem to have an influence on how people react. Tabloids, for example, tend to focus on violent and sex crimes to grab reader?s attention and sensationalise topics like paedophilia or murder. Moral panics would then seem to be a result of this type of hysteria caused by the media showing that indeed the press and media can shape the public?s fears about crime. ...read more.