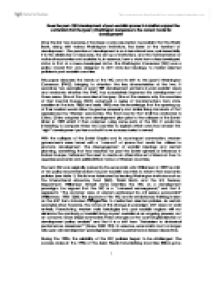 Does the post-1989 development of post-socialist spaces in transition support the contention that the (post-) Washington Consensus is the correct model for development?

Does the post-1989 development of post-socialist spaces in transition support the contention that the (post-) Washington Consensus is the correct model for development? Over the last two decades, it has been a safe assumption to proclaim that the World Bank, along with various Washington institutions, has been at the forefront of development. The practice of development is an international one; quintessentially it is the distribution of resources, the set-up of institutions, and the transformation of national economies and societies to, in essence, form a state from a less developed status to that of a more developed status. The Washington Consensus (WC) was a policy model that was designed to shift state-led ideology to market-oriented policies in post-socialist countries. This paper discusses the trends of the WC and its shift to the (post-) Washington Consensus (PWC), bringing to attention the key characteristics of the two. It examines two examples of post-1989 development patterns in post-socialist areas and evaluates whether the PWC has successively improved the development of those areas. One of the countries is Hungary. One of the reasons why the countries of East Central Europe (ECE) undertook a series of transformations from state socialism in the late 1980s and early 1990s was the knowledge that the opening up of their markets would allow for greater prosperity and similar living standards of that experienced by Western economies. The final country that shall be evaluated is China. China adopted its own development plan prior to the collapse of the Soviet Union in 1989 which it then adapted using some parts of the WC. It would be interesting to compare these two countries to explore which ones had chosen the "right" development patterns as both have success stories to reveal. With the collapse of the Soviet Empire and its counterpart communism, western governments were faced with a "vacuum" of space that could be utilized to promote development. ...read more.

Furthermore, privatisation generated corruption. People who had significant amounts of money, or who were well-connected often bribed officials to gain easy access to state property. Corruption was embodied in the highest order: infiltrating public administration, healthcare, education, judicial system, the police and politics (Berend, 2007). The need for a more home-grown style of development became apparent. The WC saw the abolition of many formal institutions and incentives which had existed throughout the years of communism. These former institutions recognised local requirements for production, labour-supply, and the relations between enterprises and state agencies. In addition to, they also supplied incentives for planners, workers, managers, and students. It was understood that the market would be the only institution and incentives for renewed growth and wealth. The Poland and Hungary Action on Reconstructing the Economy (Phare) was initiated in 1989. This was one of the few government institutions in action. Noticing the requirement for local-led policies, Phare established the Local Enterprise Agency (LEA) in 1991. The LEA worked close to the local population and produced services for individuals and enterprises. The tasks set by the LEA were narrow and specific (Lorentzen, 1996). The adaptation of the WC, taking into the considerations of the PWC, did witness an increase in development. It was estimated during 1991 that the northern ECE countries would not regain 1989 output levels until 1996. It was not until the year 2000 however that Hungary had regained its 1989 levels of outputs (Meurs, 2003). Although output levels did not stabilise until the early 2000s, development increased. To examine development we look at GDI, GDP, and variable in infrastructure. Changes in railroads are measured in passenger kilometres per million U.S. dollars of GDP, in purchasing power parity Telephone availability is measured in telephone lines per one thousand people. Change in availability will capture positive infrastructure flows that the PWC consists of, along with post-socialist reforms. ...read more.

The economically unbalanced state of flux that the WC left in its wake turned regions of Hungary into an east-west disparity. The WC had failed to familiarize itself with local requirements. By the time that the PWC had been recognised as a continuation of the WC, it was a case of too little too late. Local counties, governments and ministries were still weak a decade after the fall of socialism. There were some success stories of the PWC however. Politically, Hungary has a fully democratic institution with general elections held every five years. As of 2004, Hungary became the 21st country to join the European Union (Butler, 2007). To gain this Hungary had to pass certain standards, such as a good level of human rights. On contrary to this, China can be Hungary's complete opposite. China used a different approach to its policy reforms, almost disregarding the PWC altogether. China's reform experience is unique in its own respect among developing and transition economies. Its combination of communist and western markets allowed for its progressive economic expansion, something that it can still achieve given the current economic climate we are experiencing in 2009. This approach to China's transitional reforms has even been coined the "Beijing Consensus" by Joshua Cooper. However, China still has a long way to go with its human rights. Where China has failed on improving development, Hungary has excelled. The PWC is not the correct model for development. Neither is the "Beijing Consensus". Hungary has proven herself as the one of the most developed ECE countries, but it still has a long way to go economically compared to China. Likewise, China still has its contested human rights to evaluate before it can develop in human terms. A good development model should extract the successes of both regions and then only use it a blueprint, for development requires a sound historical and cultural knowledge of said place before decisions can be made. ...read more.