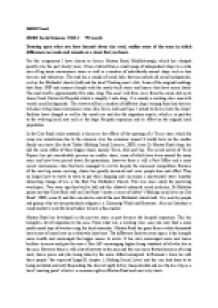 Drawing upon what you have learned about city road, outline some of the ways in which differences are made and remade on a street that you know. For this assignment I have chosen to discuss Marton Road, Middlesbrough

﻿Dd101 Tma1 DD101 Social Sciences- TMA 1 793 words Drawing upon what you have learned about city road, outline some of the ways in which differences are made and remade on a street that you know. For this assignment I have chosen to discuss Marton Road, Middlesbrough, which has changed greatly over the past twenty years. It has evolved from a small range of independent shops to a wide mix of big name convenience stores as well as a number of individually owned shops such as hair dressers and takeaways. The road has a couple of social hubs that can include all social backgrounds, such as the Methodist church (hall) and the local Working man?s club. Some of the original buildings date from 1909 and contrast sharply with the newly built stores and houses that have arisen lately. The road itself is approximately five miles long. ...read more.

The recent arrival of Tesco Express has put considerable pressure on smaller stores, some of which have been around for many years and have been passed down for generations, however there is still a Post Office and a more recent convenience store that have managed to survive despite the increased competition. Because of the new big names arriving, choice has greatly increased and saves people time and effort. They no longer have to travel to town to get their shopping and can enjoy a rejuvenated street. Another interesting change of use is the Bell Vue Methodist Church. This was once solely for practicing worshipers. Two years ago they built a hall and this allowed enhanced social inclusion. Dr Blakeley points out that Taste Buds café on City Road “creates a sense of safety” (‘Making social lives on City Road’, 2009, scene 3) and this can also be said of the new Methodist church hall. ...read more.

and this can lead them to be being excluded and only frequenting the street at night to buy cheap alcohol and use the bus stop as a local ?meeting point? which is a common sight on Marton Road and most city streets. In conclusion over the past ten to twenty years Marton Road has evolved and grew in a number of ways. From having a limited shopping service that meant people had to travel to the town centre for the weekly shop or having to push further afield for social events, we now find that aided by expansion and immigration shops and centres evolve to meet the needs of the current population i.e. the new ethnic mix. This means overall standards and choice has grown and have benefited from migration. Though it could be said some people will always fall by the wayside and imagine a history, longing for the past(Dr Georgina Blakely, making social lives, scene 3) without realising how much things have evolved better and actually falling into Bauman?s stereotype. ...read more.