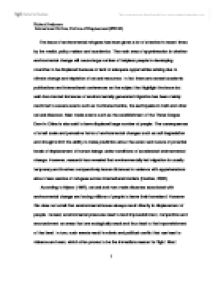 Environmental Displacement. The issue of environmental refugees has been given a lot of attention in recent times by the media, policy makers and academics. The main area of apprehension is whether environmental change will cause large number of helpless

The issue of environmental refugees has been given a lot of attention in recent times by the media, policy makers and academics. The main area of apprehension is whether environmental change will cause large number of helpless people in developing countries to be displaced because of lack of adequate opportunities arising due to climate change and depletion of natural resources. In fact there are several academic publications and international conferences on the subject that highlight the issue but well documented instances of environmentally generated migration has been mainly restricted to severe events such as Hurricane Katrina, the earthquake in Haiti and other natural disasters. Man made events such as the establishment of the Three Gorges d*m in China is also said to have displaced large number of people. The consequences of small scale and pervasive forms of environmental changes such as soil degradation and droughts limit the ability to make prediction about the extent and nature of potential levels of displacement of human beings under conditions of accelerated environmental change. However, research has revealed that environmentally led migration is usually temporary and involves comparatively lesser distances in variance with apprehensions about mass exodus of refugees across international borders (Castles, 2002). According to Myers (1997), natural and man made disasters associated with environmental change are forcing millions of people to leave their homeland. However this does not entail that environmental issues always result directly in displacement of people. Instead, environmental pressures lead to land impoverishment, competition and encroachment on areas that are ecologically weak and thus lead to the impoverishment of that land. ...read more.

It thus appears that common links and normal forecasting do not add much to the understandings in this regard. It is crucial to examine specific instances and most experts that work in this area adopt the same strategy. Myers and Kent (1995) have discussed examples of countries such as China, Bangladesh, Nigeria, Rwanda, Sudan, Somalia, Eritrea and Ethiopia and without delving too much into details their arguments are mainly deductive. The ague for instance that country X may have environmental complexities as also a large number of refugees and migrants. Thus there has to be an underlying relationship. This method has its own complications if applied to make future forecasts. For instance, they reveal that a country such as Nigeria experiences rapid growth in population and stands chances of facing future problems related to water pollution, soil erosion and desertification. Hence there is likelihood of mass migration taking place from this country. However despite such a situation Nigeria has not experienced much exodus of its population; rather it attracted large number of people from other regions during its oil boom years of the 1970s. Hence they believe that it is not correct to predict on the basis of weak evidence (Geisler et al, 2001). El-Hinnawi has defined environmental refugees as "those people who have been forced to leave their traditional habitat...because of a marked environmental disruption...that jeopardized their existence and/or seriously affected the quality of their life" (El-Hinnawi, 1985, p4). He observed three categories of environmental refugees: * People that are temporarily displaced because of environmental factors such as earthquakes and cyclones. ...read more.

Again, these projections are not based on authentic data or evidence and there is no identification of populations in any specific areas that have been made to relocate from places that have had experience of increase in sea levels. It is also true that migration is amongst a number of potential responses resulting from increase in flooding because such projections have not considered the role of human adaptability to changed circumstances (Francke et al, 1996). It is concluded that there is no empirical or theoretical basis or data to indicate a strong relationship amongst migration and environmental degradation and conflict. Consequently, there has been lot of inconsistency to be clarified and questions to be answered in the context of the entire issue pertaining to migration and environment. The subject is quite complex and has not been given the well deserved attention to isolate it from other exceedingly interrelated matters. In spite of such a situation, it is correct to say that the numbers of displaced people are expected to increase because of factors that are inclusive of the element of environmental degradation. Moreover, underdeveloped nations are more vulnerable to the vagaries of environmental change, as compared to richer nations, which is mainly because they have lesser resources to counter the resulting adversities. Under the circumstances, countries in the north may find themselves under increased pressure to give support in this regard, irrespective of whether such support is to prevent the displacement from happening or reacting to such happenings. It is thus required of policy makers to show greater concern towards environmental degradation and scarcity of resources amidst efforts to develop activities for humanitarian assistance, which also includes forced migration. ...read more.