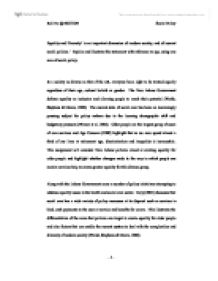 Equality and Diversity is an important dimension of modern society, and of current social policies. Explain and illustrate this statement with reference to age, using one area of social policy.

Equality and Diversity' is an important dimension of modern society, and of current social policies.' Explain and illustrate this statement with reference to age, using one area of social policy. In a society as diverse as that of the UK, everyone has a right to be treated equally regardless of their age, cultural beliefs or gender. The New Labour Government defines equality as inclusion and allowing people to reach their potential (Walsh, Stephens & Moore, 2000). The current state of social care has been an increasingly pressing subject for policy makers due to the looming demographic shift and budgetary pressures (Wiener et al, 2002). Older people are the largest group of users of care services and Age Concern (1990) highlight that as we now spend almost a third of our lives at retirement age, discrimination and inequality is inexcusable. This assignment will consider New Labour policies aimed at creating equality for older people and highlight whether changes made to the way in which people can receive services help to create greater equality for this diverse group. Along with the Labour Government came a number of policy initiatives attempting to address equality issues in the health and social care sector. ...read more.

as opposed to having a national standard (Newton & Browne, 2008). This in turn can have an effect on who receives services and often resources do not cover lower level needs as they are taken up by the more critical, resulting in some needs not being met. Worth (2002) shows from findings in her research, that the social workers and practitioners interviewed would love nothing more than to be able to use their skills to arrange appropriate care packages for older people but due to resources still driving the assessment process, it leads to them not even ask certain questions as they know they will not be able to meet certain needs. This point highlights why there are cases of unmet needs as certain aspects of peoples care are not even discussed if it is known that a resource is not available. Such factors around resources emphasise how difficult it is for an objective to raise standards to coincide with achieving value for money in a sector with such limited resources (Netten, 2005). Alongside services provided by the state, user payments are another policy measure that can help to create equality for older people. ...read more.

Direct payments seem to be a much improved way of enabling individuals to be more in control of the care they receive. One barrier that stands out in particular to the use of direct payments is the notion that older people approach services at a time of crisis therefore arranging own care can be a hindrance. If the employment of personal assistants to care for people was to be better regulated and less complicated this could ease the strain. In addition to this there is a huge contradiction in one of the goals of the National Service Framework for Older people, increasing the quality of carers and on the other hand attempting to increase the use of direct payments which is characterised by unqualified workers. For that to work then there would need to be better training for carers, as well as better regulation and monitoring of the employment of the workers. Considering the measures discussed, although equality and diversity are important dimensions of the policies and indeed within the society they exist; vague targets that seem off subject make it difficult to asses their impact. There are many contradictions between cost's, quality and emphasis which seem to make it increasingly difficult for Local Authorities to follow, especially as they can still set boundaries themselves. To move forward, increased funding and more insightful targets in the sector could help tremendously. ...read more.