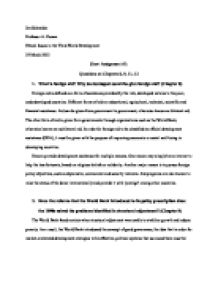 Ethical Issues in the Third World Development. Why do developed countries give foreign aid?

Jon Schneider Professor A. Dewan Ethical Issues in the Third World Development 23 March 2012 Short Assignment #2: Questions on Chapters 8, 9, 11, 12 1. What is foreign aid? Why do developed countries give foreign aid? (Chapter 8) Foreign aid is defined as a form of assistance provided by the rich, developed nations to the poor, underdeveloped countries. Different forms of aid are educational, agricultural, technical, scientific and financial assistance. Aid can be given from government to government, otherwise known as bilateral aid. The other form of aid is given from governments through organizations such as the World Bank, otherwise known as multilateral aid. In order for foreign aid to be classified as official development assistance (ODA), it must be given with the purpose of improving economic or social well-being in developing countries. Donors provide development assistance for multiple reasons. ...read more.

Good governance was one of many reforms that the World Bank decided to institute in the 1990s. The problem with instituting reforms such as good governance and rule of law is that critics believe that the World Bank has expanded into areas beyond their expertise. Another criticism is that the World Bank has advocated a move away from market-central models to ones that focus on the role plated by the state. Overall, it seems that criticism of the World Bank's actions have continued until today which leads me to believe that the World Bank's problems were never fully solved. 3. Which theoretical approach to the multinational corporation (mercantile, Marxist, international business perspective) do you find most appealing, and why? (Chapter 11) A multinational corporation is a corporation that manages production or delivers services in more than one country. ...read more.

Or the groups that are socially excluded, marginalized and poor? (Chapter 12) NGOs are a positive factor in the development process. Non-governmental organizations were recruited to mediate between donors and poor communities, and to promote the virtues of private enterprises. There are two fundamental perspectives on NGOs. One sees them as catalysts of development, however, others believe they do not serve the interests of poor as much as the transnational capitalist class of CEOs and investors. Despite the fact that NGOs may be criticised for turning the rural poor away from joining social movements, I believe that NGOs are a positive factor in the development process because if they don't try and empower the poor to act on their own behalf, seek improvements and change power structures, who will? In conclusion, I believe that NGOs primarily represent donors but primarily help the socially excluded, marginalized and poor. ...read more.