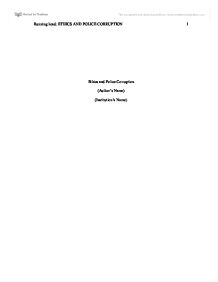 Ethics and Police Corruption (Author's Name) (Institution's Name) Abstract By nature, police work entails dealing with issues that can result in corruption. In turn, involvement in corruption leads to the problem of ethics and morality. What are the practices of police work that are deemed as corrupt? And how are they unethical or immoral? Is police corruption an administrative or ethical issue? Police corruption involves corruption of authority, kickbacks, opportunistic theft, shakedown, protection of illegal activities, direct criminal activities, payoffs, flaking, padding, etc. In this paper, I shall address some of the most common forms of police corruption, in relation to its ethical aspect. Police corruption has remained a big dilemma to society. Not only is it a problem within the police sector, but also to that of the public. And at the heart of this corruption problem is the question of whether a morally good end justifies the use of ethically, politically or legally dangerous means to its achievement (Klockars, 1985, 56). For, upon deciding whether to punish an officer who has achieved ends we applaud but who uses illicit means to achieve them, we are thus faced with an ethical dilemma. (Newburn, 1999, 11). Ethics and Corruption In general, corruption involves unethical and immoral activities involving a person's misuse of office for personal gain. But what is police corruption? ...read more.

The officer may testify untruthfully, and he or she can do it in a manner that can eventually incriminate an innocent person or free a guilty person who poses to be innocent. In this case, the judge may pretend to believe officers who are completely telling lies. This often happens with crimes involving influential and powerful individuals in society. After winning the case, the police, prosecutor, the defense lawyer and the judge receive their credit. In most cases perjury is committed by decent police officers that truly believe, that a guilty defendant will not go free unless they provide a false testimony. But does it mean that good ends justify unethical means? These acts are unethical and completely immoral. It violates the police code of ethics, which dictates that the police officer will to strive uphold justice and law enforcement (Kleinig, 1996). In addition, police profanity is also another corruptive act where police officers use obscene and profane language to the public. Good communication skills are vital tool in the execution of police duties. Commanding tones of voice along with an authoritative presence are basic skills taught at police training institutions. This does not mean that police officers should use typologies like words indicating excretory, words connected to sexual functions, and words having religious connotations. The intention of using an abusive language is especially for gaining the attention of citizens who may be less cooperative, to establish a ...read more.

Of course, there are some police officers who are working in the justice department who may use resources like computer systems to access information that consist of valuable background about a case. This is closely related to searching for criminal background for accomplices such as consulting firms, private detectives or area employers (Madsen and Shafritz, 1991). These acts are in contrast with the police code of ethics, and in fact go against the law that enforces justice in any system. But what does this say about ethics and morality? Conclusion The heart of this corruption problem is the question of whether a morally good end justifies the use of ethically or politically dangerous means to its achievement (Klockars, 1985, 56). In deciding whether to punish an officer who has achieved ends we applaud but who, in believing there to be no alternative, uses illicit means to achieve them, we thus face an ethical dilemma. (Newburn, 1999, 11). This paper illustrates the simple but uncomfortable fact that complex ethical problems are an inherent part of policing (Newburn, 1999, 13). In any criminal justice profession there will always be codes of ethics, statements of values, and principles of conducts and standards of practice that govern their execution of policing duties. And so in order to understand this problem of police corruption, we should not just understand the internal conflicts within the justice system, but also its external ethical and moral manifestations in society. ...read more.