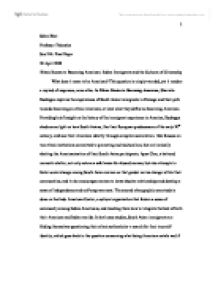 Ethnic Routes to Becoming American: Indian Immigrants and the Cultures of Citizenship

Sabra Bhat Professor Takenaka Soc 246: Final Paper 30 April 2008 Ethnic Routes to Becoming American: Indian Immigrants and the Cultures of Citizenship What does it mean to be American? This question is simply-worded, yet it renders a myriad of responses, none alike. In Ethnic Routes to Becoming American, Sharmila Rudrappa explores the experiences of South Asian immigrants in Chicago and their path towards becoming an ethnic American; at least what they define as becoming American. Providing brief insight on the history of the immigrant experience in America, Rudrappa sheds some light on how South Asians, like their European predecessors of the early 20th century, embrace their American identity through complete assimilation. She focuses on two ethnic institutions committed to promoting multiculturalism, but are ironically abetting the Americanization of their South Asian participants. Apna Ghar, a battered women's shelter, not only acts as a safe haven for abused women, but also attempts to foster social change among South Asian women so that gender norms change within their communities, and it also encourages women to leave abusive relationships and develop a sense of independence and self-empowerment. The second ethnographic case study is done on the Indo American Center, a cultural organization that fosters a sense of community among Indian Americans, and teaching them how to integrate the best of both their American and Indian worlds. In both case studies, South Asian immigrants are finding themselves questioning their ethnic authenticity- a search for their true self-identity, which goes back to the question concerning what being American entails and if that means one should replace their ethnic identity with a national American identity. As for cultural organizations, my personal question is: are they really effective in helping immigrants retain their ethnic identity and still be considered American? Throughout the text, Rudrappa is scrutinizing the cultures of American citizenship and social rights that permit one to becoming American. ...read more.

What is interesting about this situation is that it implies that South Asian diasporic communities in America desire to retain their native identity and refuse to assimilate to western culture. Although Apna Ghar states that it attempts to make immigrant women feel at home, the Americanizing through education and training renders them contradictory in their purpose. Considering how they direct their immigrants towards a more American lifestyle, ethnicity seems to be the source of their problems especially with patriarchy and their submissive dependence. They attempt to professionalize their women, rather than provide a space to return to their ethno-traditional ways. The Indo American Center also deliberates over what practices are crucial to becoming American, but they also make a concerted effort to help South Asian immigrants maintain a proud dual identity. Established in the same year as Apna Ghar in Chicago, the IAC intends to "help all immigrants maintain balance of pride in being Indian and appreciating all that India offers, but also accept, wholeheartedly, the privileges and responsibilities of American citizenship, developing loyalty, and commitments to the adoptive country, and integrating the best of both cultures" (Rudrappa 100). In order to improve the well-being of Indian-Americans, the IAC attempts to foster a sense of community among them regardless of social status or religion; they help them adjust to American life through training and education; and they also propel mainstream Americans to recognize these immigrants as productive and good citizens so that hostility directed towards them would wane. The Center acts as an open space for new, working-class immigrants, in which they can learn English, prepare for the citizenship process, and also function as an agent in which participants integrate the best of both cultures by offering classical Indian dance lessons, Indian language classes for middle-class suburban children and hold workshops to school children about Indian culture. This serves to define and bolster Indian practices for both the Indian immigrants and the general American public. ...read more.

Rudrappa's book broaches upon some very crucial questions, but she does not answer any of those questions directly in her text. Instead, Rudrappa allows for her case studies to help the reader come to their own conclusions about what it means to be American especially for Indian immigrants; if a dual identity between the new and former nationalities is possible; and if cultural organizations in America are helpful in establishing this dual identity. After reading Ethnic Routes to Becoming American, I realized that the definition of America is constantly being altered because of the way other cultures' commodities influence the diurnal affairs of middle-class Americans. I realize that my own definition of being American may not be the same as someone else's, but that truly is the beauty of the American identity. And perhaps being American is a mindset that doesn't need official papers to legitimize. An American citizen is one who is confident with who they are and what they believe, and at the same time, celebrates everyone else's right to do the same. Every American is free to pursue life, liberty, and the pursuit of happiness as long as it doesn't prevent others from doing the same. Cultural organizations like Apna Ghar and Indo American Center are revolutionary in creating a comfortable space for Indian immigrants to settle down in America, only under the condition that they come out as Americans. Rather than balkanizing America as feared by many Americans, these ethnic organizations strengthen American pride and discipline them into the culture of American citizenship. No matter how hard one tries to retain their ethnic identity in America and deny their American-ness, our culture, language, and principles as Americans forge us into a united identity that is proud of our roots, but nevertheless, American. Sources Cornelius et al., The International Migration of the Highly Skilled. Selected Chapter. Portes, Alejandro and Ruben Rumbaut. 2006. Immigrant America: A Portrait. Third Edition Rudrappa, Sharmila. Ethnic Routes to Becoming American: Indian Immigrants and the Cultures of Citizenship. New Brunswick: Rutgers UP, 2004. ?? ?? ?? ?? 1 ...read more.