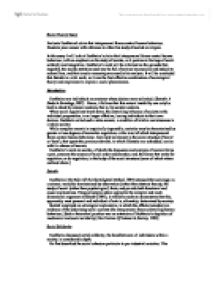 Evaluate Durkheim's claim that interpersonal forces control human behaviour. Illustrate your answer with reference to either his study of suicide or religion.

Social Theory Essay Evaluate Durkheim's claim that interpersonal forces control human behaviour. Illustrate your answer with reference to either his study of suicide or religion. In this essay I will look at Durkheim's claim that interpersonal forces control human behaviour, with an emphasis on his study of suicide, as it pertains to feelings of social solidarity and integration. Durkheim's work will be criticised on the grounds that, arguably, the suicide statistics used may be full of serious inaccuracies and subject to cultural bias, and that circular reasoning was used in his analysis. It will be concluded that Suicide is a vital work, as it was the first effective combination of sociological theory and empiricism to explain a social phenomenon. Introduction Durkheim saw individuals as creatures whose desires were unlimited. (Suicide: A Study In Sociology,1897) Hence, it follows that this natural instability can only be held in check by external controls, that is, by societal controls. When social regulations break down, the controlling influence of society on the individual propensities, is no longer effective; leaving individuals to their own devices. Durkheim called such a state anomie, a condition of relative normlessness in a whole society. ...read more.

Having established these correlations, Durkheim used multi-variant analysis to isolate the most important variables, and to determine whether these were genuine relations between interpersonal forces controlling human behaviour and suicide. For example, Durkheim recognised the possibility that it might be the national culture rather than the main religion of particular countries that accounted for their suicide rate. In order to test whether this was the case he checked on differences within the population of particular countries to see whether these differences supported his view on the importance of religion. For example, Bararia, the area of Germany with the highest number of Roman Catholics, also had the lowest suicide rate. This was, presumably, because of higher levels of collective worship and social integration associated with Catholicism. Durkheim also checked the relative importance of difference factors. He found that high suicide rates were correlated with high levels of education. However, he established that religion was more important than levels of education, because, for example, Jews had a low suicide rate despite having a high level of education. From his analysis of the relationship between suicide rates and a range of social facts, Durkheim began to distinguish types of suicide. ...read more.

Hence, it was difficult to rigorously test the theory for lack of a precise and measurable definition of a key concept. One of the most fiercest of interpretive critics of Durkheim's work is Douglas (1967). His argues that the use of official statistics, in which subjective bias may enter the process of reaching a decision on a suicide classification of a sudden death, make the reading of such statistics questionable. This bias, Douglas suggests, may explain Durkheim's findings as representing little more than a result of negotiations between the different parties involved. His second main argument against Durkheim, is the way in which he treated the act of suicide as the same type of act, without investigating the meaning attached to the act in individual cases, especially concerning cross-cultural variations in meaning. Conclusion Durkheim's theory has some advantages over other theories on the role of interpersonal forces controlling human behaviour, as Suicide was the first systematic application of the sociological method to a social phenomenon. While attacked by interpretists for the unreliability of official statistics on suicide, few have substantially attacked his theoretical conclusions. Hence, Durkheim's work provides a valuable tool to the better understanding of the mechanisms, both personal and societal, behind human behaviour. Word Count: 1998. (This word count does not include the reference list. ...read more.