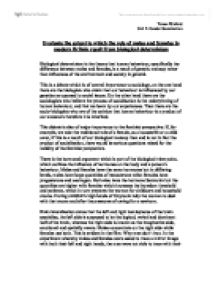 Evaluate the extent to which the role of males and females in modern Britain result from biological determinism Biological determinism is the theory that human behaviour, specifically the difference between males and females, is a result of genetic makeup rather than influences of the environment and society in general. This is a debate which is of central importance to sociology, on the one hand there are the biologists who claim that our behaviour is influenced by our genetics as opposed to social issues. On the other hand there are the sociologists who believe the process of socialisation is the underpinning of human behaviour, and that we learn by our experiences. Then there are the socio-biologists who are of the opinion that human behaviour is a product of our ancestors therefore it is inherited. This debate is also of major importance to the feminist perspective. If, for example, we take the traditional role of a female, as a housewife or a child carer, if this is a result of our biological makeup then and is not in fact the product of socialisation, there would be serious questions raised for the validity of the feminist perspective. ...read more.

dolls for girls and tools for boys. This is shown by an experiment at Sussex University, whereby 32 mothers were given a choice of a toy to give to their child, a doll or a hammer. The mothers chose to give the girls the doll and the boys the hammer. Gender is also reinforced during secondary socialisation. The media often displays gender roles. In the teen magazine 'Jackie' Mcrobbie found that there was the same underlying story every week, which was girl meets boy. Sociologists would say that this supported the image that a girl without a boyfriend was not 'normal' and that she should strive to get a boyfriend. Statham found that parents who purposely tried to socialise their children avoiding gender stereotyping found that it was not possible to prevail over cultural pressure. This is evident in the study 'frogs and snails and feminist tales' by Davis in 1989. This study presented children with books that avoided gender stereotyping, for example one story was about a princess who saved a prince, and the story finishes with 'they don't get married'. When asked if they liked these stories the children said that they didn't. ...read more.

Oakley underlined that gender is cultural occurrence and not always linked to sex, she claimed that it is gender role socialisation that is more of a factor in creating masculine men and feminine women than any genetic trait that men and women have. It is clear that our behaviour is influenced by the media and learning process, and, as we interact with the world around us we and learn from our mistakes so we learn about ourselves and develop certain behaviours. However we can not discount the influence of biology and that the shift in our hormonal balance changes the way we behave. It is also reasonable to assume that just as our physical make-up has evolved over the millennia, then some aspects of our behaviour has also been inherited alongside that. But is it possible to draw one determining conclusion and suggest that there is a greater influence from learned experiences or biological determinism? Although it would seem that there are influences on both side and it is not just one that determines the way we behave. Biological determinism http://www.elissetche.org/dico/B.htm Brain lateralisation http://www.rense.com/general2/rb.htm Frogs and Snails and Feminist tales: Davis 1989 Sociology in perspective for OCR: Page 47 Oakley argument Sociology in perspective for OCR: Page 49 ?? ?? ?? ?? Teresa Wreford Unit 3: Gender Socialisation ...read more.