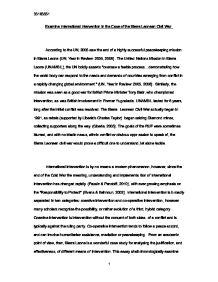 Examine International Intervention in the Case of the Sierra Leonean Civil War According to the UN, 2005 saw the end of a highly successful peacekeeping mission in Sierra Leone (UN, Year in Review: 2005, 2006). The United Nations Mission in Sierra Leone (UNAMSIL), the UN boldly asserts "oversaw a feeble process... demonstrating how the world body can respond to the needs and demands of countries emerging from conflict in a rapidly changing global environment" (UN, Year in Review: 2005, 2006). Similarly, the mission was seen as a good war for British Prime Minister Tony Blair, who championed intervention, as was British involvement in Former Yugoslavia. UNAMSIL lasted for 6 years, long after the initial conflict was resolved. The Sierra Leonean Civil War actually began in 1991, as rebels (supported by Liberia's Charles Taylor) began seizing Diamond mines, collecting supporters along the way (Gberie, 2005). The goals of the RUF were sometimes blurred, and with no triadic nexus, ethnic conflict or obvious oppression to speak of, the Sierra Leonean civil war would prove a difficult one to understand, let alone tackle. International intervention is by no means a modern phenomenon, however, since the end of the Cold War the meaning, understanding and implementation of International intervention has changed rapidly (Fassin & Pandolfi, 2010), with ever growing emphasis on the "Responsibility to Protect" (Evans & Sahnoun, 2002). International intervention is broadly separated in two categories: coercive intervention and co-operative intervention, however many scholars recognise the possibility, or rather evolution of a third, hybrid category. ...read more.

With no personal gains to be made, and no offensive mandate, they are often a welcome sight in a conflict, at least by civilians. In the time after the ECOMOG troops had left, the rebels had done well in seizing the opportunity. Within a few months, 18,000 UN peacekeepers had been deployed, the majority from the ECOWAS nations (Adebajo, 2008). However, the UN still failed to adequately equip the peacekeepers, just as it had ECOMOG. Furthermore the mission details were complex and misunderstood by many. Once again, also, a power struggle arose as some senior peacekeepers accused the Nigerian members of the mission of colluding to prolong the war, so that they may benefit from the illicit diamond trade, and whilst no proof was found, the damage to the missions reputation was done. It is imperative that a peacekeeping mission is seen, at all times, to be above and beyond the deplored violence of a war's combatants. (Goulding, 451-64) It is also imperative that the peacekeepers are seen to have a stronger military force than the combatants, otherwise their deterrent potential is diminished. However, in this case, the presence of the UN Peacekeeping force did more harm than good. The RUF asserted that the peace accord made no mention of the UN sending the force, and as such would not adhere to their involvement. The peacekeepers would soon find out that the "biggest problem in implementing peace accords in civil wars is getting parties to live up to their commitments" (Stedman, 1996). ...read more.

If it is so, that the outcome of intervention justifies the means, then surely the sum of International Intervention in the Sierra Leonean Civil War is justified. Effective, also, as although still one of the poorest nations on Earth, Sierra Leone has undoubtedly found the route to democracy, and has shown no real sign of slipping back into conflict. This is not to say, however, that the International Intervention was without criticism. Sierra Leone was an unprecedented case in when the conflict began, lacking in clear lines of division. Perhaps mindful of a public relations disaster, or perhaps sensitive to the history of the Sierra Leonean people (particularly the Krio), The United Nations was happy to delegate Intervention to ECOWAS. ECOWAS was formed for economic purposes, with little experience in military intervention and this was problematic from the very beginning. It would have better for all involved if the UN had taken the reins after the Abidjan Peace Accord. It should no longer be acceptable for the UN to delegate peacekeeping missions to the nearest regional organisation. Interventionists failed, for far too long, to see the link between the diamonds of Sierra Leone, the international community, and the conflict. Had the embargo been placed sooner, the Civil War could have ended years before it did. As stated earlier, the Sierra Leonean Civil War saw many means of intervention used, some more effective than others. What cannot be tolerated, however, is the half-hearted approach the United Nations took to intervening early on. ...read more.