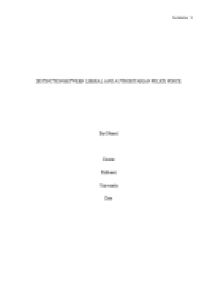 Examine the Distinction between Liberal and Authoritarian Police Forces

Transfer-Encoding: chunked ﻿Surname DISTINCTION BETWEEN LIBERAL AND AUTHORITARIAN POLICE FORCE. By (Name) Course Professor University Date The Police force in England and the USA was invented roughly between the years 1825 to 1865 so as to counter the rise in crime rates during that period. In addition to plummeting crime rates, the elites used the police force to act in instances of collective actions such as defiant crowds and riots. In the contemporary society, police force and policing play a critical role in post-conflict development. The duty of police officers is to enforce the laws of the society as well as ensure citizens and property are safe. Police are also used in reconciliation process as well as ensuring that they manage conflict in such a way that chances of reoccurrence are minimal. Criminologists and international relation experts divide policing into two major sections i.e. the authoritarian police force and the liberal police force. It is, therefore, imperative to note that international relationship experts define liberal police force as composed of police officers that are non-conservative people that foster equality and liberty, they have personal beliefs that the government should be proactive in supporting social and political changes whereas some international relation analysts describe authoritarian police force as those police officers that favor and enforce strict obedience to the government at the expense of his freedom. This form of policing explains the intense brutality experienced in the police force (Derek 2004, 89). Authoritarian police force mainly are composed of two categories, the traditional authoritarian as well as the bureaucratic authoritarian police forces. The traditional authoritarian police force act is basing their belief that the person in authority i.e. the leader of the nation should be in power by all means. The ensure that the leader is in authority through dedicating all their loyalty to the ruling to party by fact that the leader rightfully owns the title of being a leader and that title should be at all time. ...read more.

They were more rational in acknowledging that criminal activities are not by the race a person belongs to but rather is innate or determined by a person's personality. Liberal police target was mainly demeanor rather than the race of the suspects. This research clearly showed that there is a difference between the liberal police force and the authoritarian police force (Paynich 2009, 97). Most people, both criminologists and police officers, agree that the best way to tackle political unrest or post-conflict situation is to use overwhelming force. This means of combating collective behavior such as riots, strikes, and political unrest justifies the ruthless nature of police officers as well as the use of lethal force towards the alleged threat. This point of view lead to police officers displaying paramilitary personalities that are mostly authoritarian in nature that is they shoot civilians in protests which are against the UN conventions on rules and regulations of war, battle where the police officers or military personnel are prohibited to kill an unarmed person or civilian. Therefore, it is imperative to train police officers on how to defuse tense circumstances (Williams. They can achieve this by acknowledging the importance of investigating a crime before deciding on the means to combat the crime or collective behavior. Most liberal police officers display the trait of being calm and allowing the suspect have their human rights and privileges at their disposal before they conclude their investigation concerning how the suspect is to the charges filed against him or her. This way of distracting the liberal police force from the authoritarian one is valid since we get to know the difference in the way authoritarian and liberal police officers approach a criminal case or a tense situation (Ortmeier 2010, 211). Also, liberal police officers adopt community policing program to combat criminal activities. This is contrary to the authoritarian police force that tend to be suspicious of everybody's character thus they cannot endow the community with the privilege of policing since they are suspects. ...read more.