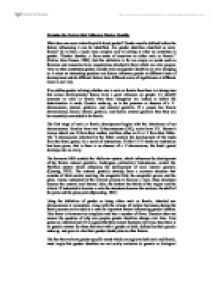 Examine the Factors that Influence Gender Identity What does one mean when they talk about gender? Gender must be defined before the factors influencing it can be identified. Are gender identities classified as male, female? Or is there a much more complex way at looking at what we constitute as gender. "Gender identity...a from sense of ourselves as either male or female." (Patrice Dow-Nelson, 2003). But this definition is far too simple as words such as feminine and masculine have connotations attached to them which can alter peoples view on what constitutes gender. Gender roles and gender identities are ever changing so it raises an interesting question can factors influence gender at different times of development and do different factors have different levels of significance at different times in our lives. If we define gender as being whether one is male or female then there is a strong case that sexual developmental factors have a great influence on gender. To identify someone as male or female then three categories are looked at before the determination is made. Genetic make-up, as in the presence or absence of a Y-chromosome; internal genitalia; and external genitalia. If a person has female chromosomes, female internal genitalia, and female external genitalia then they can be reasonably concluded to be female. The first stage of male or female development begins with the inheritance of sex chromosomes. ...read more.

Is gender not just what a person is biologically; can it be the way a person behaves? If so then how human have's come to decide what is acceptable behaviour for the opposing genders. From a very young age, once a child has been identified as being male or female, the parents of that child along with all the other social characters it may interact with treat the child according to its gender classification. Boys play with guns, girls play with dolls. If a baby in a pram wears a blue outfit it is commonly assumed to be a boy. The possibility that the baby may be wearing clothes that belonged to an older sibling is not usually considered. At school, teachers expect young boy's to be boisterous and clumsy, while girls are expected to be quiet and diligent. The nursery rhyme which calls girls 'sugar and spice and everything nice', while the boys were 'frogs and snails and puppy dogs tails'; this shows the expectations of boys and girls from an early age. Even as adults, people whose gender identities do not conform to the gender roles that their sex should have are stigmatised in our society. "When did Girls get so Brutal?" (Daily Mail May 16th 2000), an article depicting the violent assault, robbery and murder of an OAP, showed how these acts were seen as so much worse because they were committed by young girls. ...read more.

At puberty the sex organs do begin to respond and the external genitalia begins to resemble that of a male. These 'machehembra', as they are sometimes called, are raised as girls but at puberty switch to being men (Imperato-McGinley et al., 1979). This study suggests that social environment is not important, but due to the fact that all the cases were of related individuals it is not altogether clear. From the evidence what influences gender identity is very complex. This is because gender and gender identity are not the same thing. One's gender can be allocated as being inherited and controlled by the sex chromosomes; however gender identity seems in some cases to be unstable. It can be influenced by many things. In the case described earlier; the botched circumcision, when found living as a 'man', the subject claimed to have always felt something was wrong. At a young age his sex organs had been changed to make his gender female but he felt that the identity that came with this was not suitable for him. It seems like foetal hormones play a big role in gender specific behaviour and perhaps there is some influence on gender identity as well, but that is too simple a solution. So many factors come into affect making it a very subjective phenomenon. People see their own gender identity as something that is appropriate to their own bodies, and there is no simple answer to a governing body that can determine a person's gender identity. ...read more.