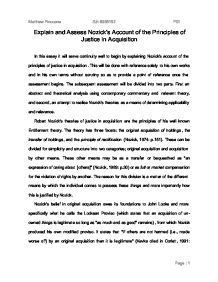 Explain and Assess Nozick's Account of the Principles of Justice in Acquisition In this essay it will serve continuity well to begin by explaining Nozick's account of the principles of justice in acquisition. This will be done with reference solely to his own works and in his own terms without scrutiny so as to provide a point of reference once the assessment begins. The subsequent assessment will be divided into two parts. First an abstract and theoretical analysis using contemporary commentary and relevant theory, and second, an attempt to realise Nozick's theories as a means of determining applicability and relevance. Robert Nozick's theories of justice in acquisition are the principles of his well known Entitlement theory. The theory has three facets: the original acquisition of holdings, the transfer of holdings, and the principle of rectification (Nozick, 1974: p.151). These can be divided for simplicity and structure into two categories; original acquisition and acquisition by other means. These other means may be as a transfer or bequeathed as "an expression of caring about [others]" (Nozick, 1989: p.30) or as full or market compensation for the violation of rights by another. The reason for this division is a matter of the different means by which the individual comes to possess these things and more importantly how this is justified by Nozick. ...read more.

In that time practically all territory on the planet has been appropriated and it is a matter of the vastly different worlds Locke and Nozick were addressing when they came to any differences in their theories of acquisition. This does not, however, shield Nozick from scrutiny in his claim that the rights of those without property, are not violated by those with, either by acquisition or inheritance. First to be determined is how Nozick judges that someone has been "harmed". A. R. Lacey deemed that Nozick "seem[ed] to assume that the base line is a state of nature with no appropriation at all" and admits that "This would indeed allow a lot." (Lacey, 2001: p.43). Whilst the position is defended by Hailwood on the grounds that prior appropriation might hinder the execution of natural rights (Lacey, 2001: p.43), this does not go on to serve as a defence of Nozick's theory that prior appropriation is only a restriction of rights, not a violation. Nozick would defend the justice of this position, in the case of Island X and the islanders without property, in that regardless of who owns the property all of the islanders have employment ("indirect benefits they receive from the system, which are primarily due to economic development spurred by it" (Kavka cited in Corlett, 1991: p.300)). ...read more.

In his famous example of Liberty upsetting the pattern system, that of Wilt Chamberlain charging an extra $25 per game and per spectator, voluntary action is the means by which equality is disrupted. Few people call for intervention on such a personal, physical level, indeed Scanlon sees that "What offends an egalitarian primarily is the great inequality in the initial resources people have as a result of the social positions into which they are born". The point he makes is that Nozick's theory objects to the pervasive actions and desires of a non-existent position. Whist overstated to some extent, this is an attractive statement on which to conclude. It provides reasoning for the inaccurate foundations of Nozick's account of the theories of justice in acquisition; that it was constructed as a competitor to end-state and pattern but in being too keen to distance itself from them disregarded both their flaws and merits. It also justifies the inaccuracy in application to the real world, in which the theories fail. Nozick's theory really is political theory and as such pursues truth more than applicability. Lawrence Davis (cited in Paul, 1981: p.353) recognises Nozick's failures but also distinguishes in them a purpose nonetheless: "Nozick has given us a new and ingenious theory of just distributions. His attempt to clear away the opposition appears to have failed, but he has articulated another point of view from which to assess the justness of the patterns of holdings around us. ...read more.