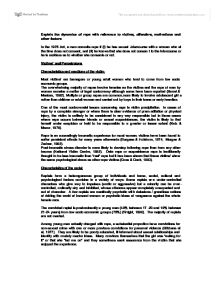 Explain the dynamics of rape with reference to victims, offenders, motivations and other factors.

Explain the dynamics of rape with reference to victims, offenders, motivations and other factors In the 1976 Act, a man commits rape if (i) he has sexual intercourse with a woman who at the time does not consent, and (ii) he knows that she does not consent to the intercourse or he is reckless as to whether she consents or not. Victims' and Perpetrators Characteristics and reactions of the victim Most victims' are teenagers or young adult women who tend to come from low socio economic groups. The overwhelming majority of rapes involve females as the victims and the rape of men by women remains a matter of legal controversy although some have been reported (Sarrel & Masters, 1982). Multiple or group rapes are common,more likely to involve adolescent girls rather than children or adult women and carried out by boys in their teens or early twenties. One of the most controversial issues concerning rape is victim precipitation. In cases of rape by a complete stranger or where there is clear evidence of premeditation or physical injury, the victim is unlikely to be considered in any way responsible but in those cases where rape occurs between friends or casual acquaintances, the victim is likely to find herself under suspicion or held to be responsible to a greater or lesser extent (Katz & Mazur, 1979). ...read more.

although others argue that rape is a fundamentally sexual act in which aggression is used to achieve a sexual aim. Feminist theories of male violence against women stress the social construction of masculinity, violence and sexuality in patriarchal society whose object is to reproduce and maintain their relative status and authority over women (Hanmar et al, 1989; Scully, 1990; Dobach et al, 1992; Newburn & Stanko, 1994; Jefferson, 1997). Homosexual rape may be common in many male prisons and involved young relatively weak prisoners (Davis, 1970). He saw this behaviour more as a means of asserting masculinity and power than of gaining sexual pleasure. The rape victim would not only be humiliated, he would also be looked upon as feminine. Homosexual assaults between women sometimes occur in women's prison (Brown Miller, 1975). The motivations for rape have been put into three main categories (Grodh & Hobson, 1979, 1983): 1. Anger rape - resulting from anger, rage or a sense of unfair treatment usually following an argument; 2. Power rape - has sexual conquest as its main goal for the experience of power; and 3. Sadistic rape - which is the least common and the rapist gets sexual gratification out of the victim's pain and suffering. ...read more.

Existing classification schemes for rapists tend to be anecdotal and based on intuition and interpretation of motive rather than empirically derived and tested. Recent work has shown that it is possible to form coherent classification schemes of clinical relevance based on motivational concepts such as anger or impulsivity (Knight & Prentky, 1989) or simple single variables relating to either the offence or the offender (Grubin & Gunn, 1990). Explanations of rape are predominantly social cultural and social interactionist arguing that rape reflects more general attitudes by men towards women in any particular society and that a substantial proportion of rapes arise from misinterpreted and unreciprocated seductions (Sanday, 1981; Sorrenson & White, 1992; Scully, 1990; White & Sorrenson, 1992). There are many men with aggressive / criminal tendencies and many men with doubts about their masculinity but very few of them rape - the reasons for this remains unresolved by any of the research literature and more systematic work needs to be undertaken to examine the reasons for this and the precise motivations for rape. Also, it could be beneficial to closely examine rape-free cultures to bring about widespread societal changes in attitudes towards women and thus decrease the incidence of rape. ...read more.