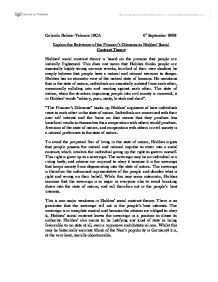 Explain the Relevance of the Prisoner's Dilemma to Hobbes' Social Contract Theory.

Gabriela Belmar-Valencia 13CA 6th September 2003 Explain the Relevance of the Prisoner's Dilemma to Hobbes' Social Contract Theory Hobbes' social contract theory is based on the premise that people are naturally frightened. This does not mean that Hobbes thinks people are essentially highly strung nervous wrecks, terrified of their own shadow; he simply believes that people have a natural and rational aversion to danger. Hobbes has an atomistic view of the natural state of humans. He maintains that in the state of nature, individuals are essentially isolated from each other, occasionally colliding into and reacting against each other. The state of nature, when the structure organising people into civil society is removed, is in Hobbes' words "solitary, poor, nasty, brutish and short". "The Prisoner's Dilemma" backs up Hobbes' argument of how individuals react to each other in the state of nature. Individuals are concerned with their own self interest and the focus on that means that they produce less beneficial results to themselves than cooperation with others would produce. ...read more.

There is no guarantee that the sovereign will act in the people's best interests. The sovereign is in complete control and because the citizens are obliged to obey it, Hobbes' social contract leaves the sovereign in a position to abuse its authority. Hobbes' also seems to be justifying any kind of state as being favourable to no state at all, even a repressive and dictatorial one. Whilst this may be historically accurate (think of the n**i's popularity in Germany) it is, at the very least, morally objectionable. Hobbes also seems to regard the state of nature as being historically accurate. However the state of nature is ahistorical. From the beginning, people have always lived in social, organised groups. Primitive social order can even be observed in animals in the natural world. However Hobbes considers this and agrees that the state of nature was "never generally so, all over the world." He does however point towards the life of Native American tribes as examples of the state of nature, pointing out that without a government they live in a "savage" and "brutish" environment. ...read more.

This fact, and the way in which he seems to justify dictatorship, means that Hobbes' is rather out of date. Hobbes' argument seems to be a reflection of his historical context. His idea of the state of nature and the importance of fear in his social contract theory seems to have been influenced by the English Civil War This is supported by Hobbes' own admission that "fear and I were born twins". Hobbes has some convincing arguments. The emphasis he places on the importance of the state providing social order is attractive and the main strength of his argument. However his social contract theory is coloured by the general beliefs of his time. He seems to justify dictatorship, as democracy was in its infancy. The civil unrest of his time means that urgent fear is prevalent in his social contract theory and considered a rational impulse when, upon reflection, this is problematic. Hobbes presents us with arguments worthy of serious consideration and debate, but he is not as successful in being completely convincing as he believed himself to be. ...read more.