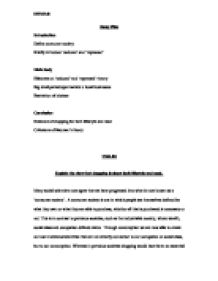 Explain the view that shopping is about both lifestyle and need.

Essay Plan Introduction Define consumer society Briefly introduce 'seduced' and 'repressed' Main body Elaborate on 'seduced' and 'repressed' theory Big retail parks/supermarkets v local businesses Restriction of choices Conclusion Evidence of shopping for both lifestyle and need Criticisms of Bauman's theory TMA 02 Explain the view that shopping is about both lifestyle and need. Many social scientists now agree that we have progressed into what is now known as a 'consumer society'. A consumer society is one in which people see themselves defined by what they own or what they are able to purchase, whether all that is purchased is necessary or not. This is in contrast to previous societies, such as the industrialist society, where wealth, social class and occupation defined status. Through consumption we are now able to create our own individual identities that are not directly connected to our occupation or social class, but to our consumption. Whereas in previous societies shopping would have been an essential activity where people would purchase basic necessities in order to live, it has now become far more of a social activity, where people regularly purchase items beyond basic needs. In post-industrialist society, the creation of jobs within the service sector made the divide between the rich and the poor far more complex, with a middle class now in existence. ...read more.

A young person with very little money may be able to earn social acceptance by what they wear and what they do. Although they have little money they would still find it easier to become a part of consumer society than say an older person, who may find it more difficult because they have to spend what they have on food, bills and basic necessities (Hetherington 2009, p. 29). Society has become so concerned with self-expression and creating personal identities through consumption, that more and more people are purchasing goods that would be classed as 'luxury' items. For the majority, consumption has now become about lifestyle choices. So have the retailers had a part to play in this? Have they influenced the way in which society now consumes? Peter Jackson's study of retail outlets and why many people prefer to shop there supports Bauman's concept of the 'seduced' and the 'repressed', i.e. the winners and losers of a consumer society. According to Jackson's survey many people prefer shopping at retail outlets not only because of the large range of goods available in one place but also because they deem them to be safe, regulated and convenient places (Hetherington 2009). ...read more.

Furthermore, big retail outlets and supermarkets seek to influence the way in which people consume. They use underhand tactics to seduce people into buying things that they may not normally buy by displaying them in a way that is eye-catching and appealing to the consumer. In addition to this, they further exclude the 'repressed' by restricting the choices they have. However, there are some criticisms of the argument that Bauman puts forward. Firstly, he fails to account for the people who choose not to shop at big retail parks and supermarkets as a matter of personal choice, even though they have the money to shop there if they wished to do so. For example, those individuals who are concerned with the environment may prefer to shop at smaller, local shops that pride themselves on selling local produce. Secondly, it might also be argued that he 'downplays the importance of shopping for essentials, as a routine activity in which providing for others is just as important' (Hetherington 2009, p. 47). It is also important to remember that every consumer has to shop for essentials, not only the 'repressed', and this supports the argument that shopping is about need. Yet as previously mentioned, the majority of people now consume way beyond that thus supporting the argument that shopping is about lifestyle also. ...read more.