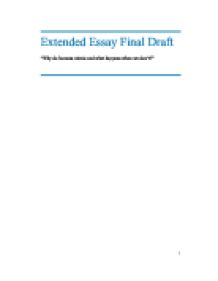 Extended Essay on Mimicry in Humans

Extended Essay Final Draft "Why do humans mimic and what happens when we don't?" ABSTRACT "Why do humans mimic, and what happens when we don't?" How many times have you caught a friend, colleague, or acquaintance mimicking someone else? Mimicry is everywhere - we all do it and we do it often. The glances and smiles traded during people working in an office, restaurant, bar, park or even at home are all forms of mimicry. Humans are intensely social animals and mimicry is a critical part of human social interactions. There are many forms of mimicry but it is most simply put as the unconscious reflexive copying of someone else's facial expressions, posture, gesture, mannerisms, mood, smiles and voice patterns. Most mimicry occurs in conversation when all the above elements are seamlessly integrated during social interactions. This essay highlights the importance of mimicry as a social facilitator, the benefits of mimicry such as increased self-esteem, a feeling of belonging, increased rapport, strong social bonds, increased cooperation and prosocial behaviour. It also outlines the biological causes of mimicry and the effects of a dysfunctional mirror neuron system which results in ASD and an inability to mimic as well as the consequences of not mimicking. Additionally, this essay provides a holistic understanding of the behaviour that is mimicry and aims to give insight into this complex phenomenon. CONTENTS PAGE ABSTRACT 2 INTRODUCTION 3 REASONS FOR MIMICRY 5 BENEFITS OF MIMICRY 7 INABILITY TO MIMIC AND CONSEQUENCES 9 CONCLUSION 12 REFERENCES 15 INTRODUCTION The effects of mimicry have been studied extensively in psychology in order to analyze and understand mind behaviours. At a broad level, mimicry can be defined as the observed change in behaviour where people will unconsciously and automatically replicate others either verbally or non-verbally (Stel and Vonk, 2010). Mimicry is present in everyday life and is observed frequently. For instance, people often tend to copy non-verbal behaviours like gestures and expressions. ...read more.

The consequence of these feelings is an increase of cooperative behaviours (Lakin and Chartrand, 2003). Studies have shown that when people seek to build a strong social bond of cooperation, trust and support they highlight their similarities to the other through mimicry. A study conducted by Stel and Vonk (2010) measured the effects of mimicry between participants in face to face interactions. The results of the study indicated that participants feel more tuned in to each other when they mimicked each other. Additionally, the participants also reported a stronger feeling of bonding and smoother interactions when they were mimicked. Therefore, it can be implied that when an individual finds the drive to build a strong relationship with another, he/she will highlight their similarities though mimicry of the other's facial expressions, mannerisms, speech patterns and style. The feeling of bonding as a consequence of mimicry was explored in detail in a study conducted by Ashton -James et al. (2007) in which the researchers uncovered one of the mechanisms that might arbitrate the association between mimicry and cooperation. In the study, the participants underwent an interview with the researchers about their memory of everyday events. During the interview the participant was either mimicked or not mimicked by the experimenter. In the mimicked condition the experimenter was trained to subtly copy the behaviours of the participant. In the no mimicry condition the experimenter had to actively refrain from mimicking the participants' gestures and postures. After the interview, the participants were given an open ended questionnaire designed to test self construals in response to the question "who am I?". The results of the study indicated that after individuals were mimicked they were more inclined to answered the questions in the survey alluding to their social roles or relationships than personal attributes associated with physical descriptor's or attitude. This shows that that mimicry induces a collective self-construal. In particular, after individuals are mimicked, they are more likely to adopt a collective self-construal, which means they tend to perceive themselves ...read more.

This is evident in studies conducted on the relationship between mimicry and social affiliation. The reason that humans have the need to signify their relationships in such manner is explained through Maslow's hierarchy of needs. Put simply, mimicry is used as a tool, unconsciously by people to help us fill the need to belong. Also, other studies have shown that mimicry not only fulfills the need to belong but it also helps to build self-esteem and self worth of an individual when they are mimicked (Yabar et al., 2006; Lakin et al., 2008). Finally, as a result of mimicry individuals are more like to act supportively and cooperatively towards someone who subtly mimics their behaviour (Lakin and Chartrand, 2003; Stel and Vonk, 2010). This is because mimicry conjures feelings of support and trust between the two parties and the consequence is more cooperative and pro social behaviour (Kouzavoka et al., 2008). Studies have also shown that mimicry creates feelings of empathy and makes individuals behave more generously towards others thereby encouraging social bonding and cooperation among individuals (Ashton-James et al., 2007; Baaren et al., 2004; Stel et al., 2008). A biological explanation of mimicry is understood through the use of the mirror neuron system. This system is complex and fires when a person observes an action as well as engages in the action. This is unique to the mirror neurons which are specific structures linked to mimicry. It is also understood that ASD sufferers do not display mimicry and this is because they have dysfunctional mirror neurons. The specific explanations of what is wrong with the mirror neurons in ASD sufferers is explained by the 'broken mirror' theory as well as alterations of the theory like the EP-M model (Icaoboni and Dapretto, 2006; Hamilton, 2008). This model proposes that not all of the mirror neurons in ASD sufferers are dysfunctional, only the M-route is, which is responsible for the subtle, unconscious behaviour that facilitates social interaction, in other words, mimicry. As a consequence of this defective neuron system, autism sufferers often have poor social skills, communication problems and developmental issues. ...read more.