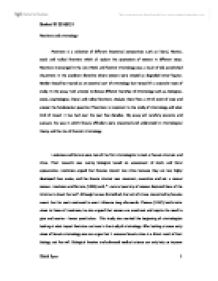 Feminism and criminology Feminism is a collection of different theoretical perspectives such as liberal, Marxist, social and radical feminism which all explain the oppression of women in different ways. Feminism re-emerged in the late 1960's and feminist criminology was a result of old, established chauvinism in the academic discipline where women were viewed as degraded minor figures. Gender should be treated as an essential part of criminology but instead it's a specialist topic of study. In this essay I will attempt to discuss different branches of criminology such as, biological, social, psychological, liberal and radical feminism. Analyse them from a critic's point of view and answer the fundamental question if feminism is important to the study of criminology and what kind of impact it has had over the past few decades. My essay will carefully examine and evaluate the way in which female offenders were presented and understood in criminological theory and the rise of feminist criminology. Lombroso and Ferrero were two of the first criminologists to look at female criminals and crime. Their research was mainly biological based on assessment of skulls and facial appearances. Lombroso argued that females commit less crime because they are less highly developed than males, and the female criminal was unnatural, masculine and not a normal woman. Lombroso and Ferrero, (1885) ...read more.

He also argued that women are inferior to men and he believed that defecting qualities in females were a result of 'masculinity complex'. Freud uses the Greek mythological character Oedipal to uncover his theory that females fail to overcome the Oedipal complex where a sex is attracted to opposite the sex parent thus making them morally inferior, week and unable to control there impulses. This kind of theory is open to criticism and is not considered valid in the study of female criminality because "inferiority in females is not due to Oedipal conflict, but simply because of the unnatural relationship of male dominance that exists between the sexes." (White, R. D. 2000) Socio economic theorists reject the masculinisation as cause of crime. Socio economic theorists have also looked at criminology and believe that illegitimate expression of the role of expectation is the cause of crime. Females with this theory are seen to engage in criminal activity, when the legitimate roads to achieve social goals are closed and illegitimate left open. Studies within this theory suggest women are likely to engage in crime when economically disadvantaged, concluding that female criminal behaviour is linked to their socialisation or opportunity Post modern feminism has little or even no impact on feminism nevertheless feminism and post modernism had criticised criminology in many ways. ...read more.

(lorrain gelsthorpe). Essay also points out how traditional criminology does very little justice and fails to explain the different ways women can be treated in criminal justice system. It is hard to deny that feminist scholarship had anything other then important impact in recent years. This impact resulted in women no longer being ignored in any major research and criminology is no longer gender blind. Some critics may still argue that all theories are still based around men. Carlen and Worrall (1987) pointed out some crucial points that feminism has had on criminology. Firstly it has called into question previous theories of law breaking, it has suggested new lines of research and finally provoked new uses for old concepts. Feminism therefore has had an impact on our understanding of women offending, their victimization, and their treatment by the criminal justice system. Although feminism has had a large impact and many studies and research method have changed but criminology is still male dominated and male oriented. I will also suggest that There is a need for something called futurist criminology, which is similar, but not quite the same as newsmaking criminology. It is a fact that old myths are frequently replaced by new myths. But it is also a fact that sophisticated criminals will use criminological theory as excuses for misbehavior. Rather than being behind them as a think tank for development of their motivational systems, it is preferable to be one step ahead, and incorporate "criminological vision" into our theories. ...read more.