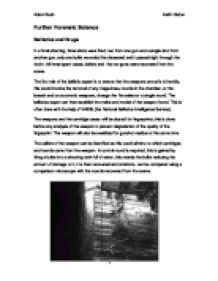 Forensic Science. The first role of the ballistic expert is to ensure that the weapons are safe to handle, this would involve the removal of any magazines, rounds in the chamber, or the breach and on automatic weapons, change the fire selector to single r

Further Forensic Science Ballistics and Drugs In a fatal shooting, three shots were fired, two from one gun and a single shot from another gun, only one bullet wounded the deceased and it passed right through the victim. All three spent cases, bullets and the two guns were recovered from the scene. The first role of the ballistic expert is to ensure that the weapons are safe to handle, this would involve the removal of any magazines, rounds in the chamber, or the breach and on automatic weapons, change the fire selector to single round. The ballistics expert can then establish the make and model of the weapon found. This is often done with the help of NABIS (the National Ballistics Intelligence Service). The weapons and the cartridge cases will be dusted for fingerprints; this is done before any analysis of the weapon to prevent degradation of the quality of the fingerprint. The weapon will also be swabbed for gunshot residue at the same time. The calibre of the weapon can be identified as this could eliminate which cartridges and rounds came from the weapon. A control round is required, this is gained by firing a bullet into a shooting tank full of water, this retards the bullet reducing the amount of damage to it, it is then recovered and striations can be compared using a comparison microscope with the rounds recovered from the scene. ...read more.

Scanning electron microscopy coupled with dispersive x ray analysis provide detailed evidence and identification of gunshot residue which can be compared to manufacturers of ammunition. Scanning Electron Microscopes (SEM) create a magnified image using electrons in place of light waves in conventional light microscopy. SEM's provide a very detailed 3D image at a far greater magnification than is possible through light microscopy. The images produced are in greyscale due to them being created without the use of light waves. An example image is shown below (head louse at approximately x1000 magnification). Colour can be added after the image has been produced, although the colours are not necessarily an accurate rendition of the sample. One of the downsides with electron microscopy is that the samples have to be arduously prepared and must conduct electricity (due to the nature of an electron microscope). This can be achieved by coating the sample in a very thin layer of conductive material, often gold, in a process using a sputter coater. The sample is then placed in a vacuum chamber, this is because the radiation used in electron microscopes is of such a short wavelength that air particles would interfere with the image. The electron beam is then focused onto the specimen through a series of electromagnetic rings. Near the specimen a set of scanning coils move the beam back and forth over the specimen point by point, row by row. ...read more.

It can be tuned to the energy of one of the characteristic x rays of an element of interest, in this case elements such as lead, tin, antimony, barium, potassium and sulphur. This enables an image of the distribution of these elements in the surface portion of the irradiated sample. These images are known as maps and can be used to calculate % elemental composition of the gunshot residue and compared to manufacturers' compositions of primers and propellants in their ammunition. There are three levels of classification of illegal drugs in the UK. Class A is the most serious with Class C being the least. An example of Class A, B and C are given below MDA, MDMA (ectasy) Class A Amphetamine Class B Benzodiazapine Class C There are three reagents that could be used to identify the drugs through presumptive spot testing. These are Mandelin's reagent, Marquis reagent and Liebermann's reagent. The table below shows the colour changes expected with each of the drugs. Drug Mandelins Marquis Liebermanns MDA, MDMA Purple - Blue No Change No Change Amphetamine Orange No Change Orange Benzodiazapine No Change No Change Red - Orange Reference Jackson, A. (2008). Forensic Science. Essex: Pearson Education Ltd. Langford, A. (2005). Practical Skills in Forensic Science. Essex: Pearson Education Ltd. http://www.firearmsid.com/A_FirearmsID.htm (29/05/10) http://www.monzir-pal.net/.../Barbiturates%20and%20Benzodiazepines%20Presentation.pdf (29/05/10) http://www.sciencedirect.com/science?_ob=ArticleURL&_udi=B8JJ5-4SD2HKY-6&_user=10&_coverDate=10%2F31%2F1967&_rdoc=1&_fmt=high&_orig=search&_sort=d&_docanchor=&view=c&_searchStrId=1357832982&_rerunOrigin=google&_acct=C000050221&_version=1&_urlVersion=0&_userid=10&md5=0172b8567e2a1762a91ec5523029afa5 (29/05/10) ?? ?? ?? ?? Adam Bush Keith Ebdon 1 ...read more.