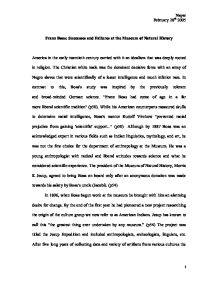 Franz Boas: Successes and Failures at the Museum of Natural History

Franz Boas: Successes and Failures at the Museum of Natural History America in the early twentieth century carried with it an idealism that was deeply rooted in religion. The Christian white male was the dominant decisive force with an army of Negro slaves that were scientifically of a lesser intelligence and much inferior race. In contrast to this, Boas's study was inspired by the previously tolerant and broad-minded German science. "Franz Boas had come of age in a far more liberal scientific tradition" (p50). While his American counterparts measured skulls to determine racial intelligence, Boas's mentor Rudolf Virchow "prevented racial prejudice from gaining 'scientific' support..." (p50) Although by 1887 Boas was an acknowledged expert in various fields such as Indian linguistics, mythology, and art, he was not the first choice for the department of anthropology at the Museum. He was a young anthropologist with radical and liberal attitudes towards science and what he considered scientific experience. ...read more.

(p55) Nonetheless Boas's success lies in the museum's Hall of Northwest Coast Indians. The hall, after opening in 1899, was inspired by a German sense of romanticism and religiosity (p55). He overrode the traditional method of display for a stimulating new look at history as contextual evidence. Artifacts were neither placed in evolutionary displays that ranged from the primitive to the modern nor exhibited by type - baskets, utensils, etc. Instead, they were placed in an area with other artifacts from a tribe to experience the culture as a whole. Like the article points out, Boas's argument was "against seeing human culture in evolutionary terms, rising from the primitive to a summit on which the inventors of the evolutionary scheme inevitably perched. Boas liked to point out how recent most civilizations were and how time had revealed 'innate' abilities" (p55). In 1902, when the Jesup Expedition was finally complete, Boas's interest moved to yet another study. ...read more.

It is no surprise to me that Boas's stay at the Museum, although short lived, was an ideal force for erudition. This was the time when the American and European sense of revolution was striving at a ridiculous pace towards knowledge and extensive study; a time during which the ideals of freedom, liberty and democracy were challenged and re-defined. At the same time the presence of slavery and the idea of a subhuman race were accepted by the common man. Books like Grants "The Passing of the Great Race" were bestsellers and the Ku Klux Klan had over 4 million members. A scientist with radical and idyllic views was much needed. Boas entered the scientific discussion with a command on anthropological study. His successes far outnumber his failures both as a scientist and an anthropologist. During the course of his lifetime, he provided challenging theories based on factual information. The same cannot be said of other so-called scientists present during the same time. ?? ?? ?? ?? Nayar February 28th 2005 i ...read more.