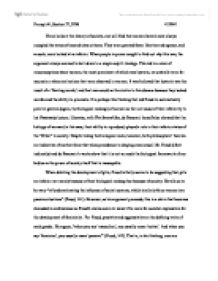 Freud and de Beauvoir on gender difference. Freud (albeit indirectly) and de Beauvoirs works show that it is not so much the biological framework of our bodies as the power of society itself that is inescapable.

If one looks at the history of society, one will find that women have almost always occupied the status of second-class citizens. They were granted fewer liberties and agency, and as such, were looked at as inferior. When people in power sought to find out why this was, the argument always seemed to boil down to a single culprit: biology. This led to a slew of misconceptions about women, the most prominent of which was hysteria, an umbrella term for neurosis or abnormal actions that were observed in women. It was believed that hysteria was the result of a 'floating womb,' and that men could not be victim to this disease because they lacked wombs and the ability to procreate. It is perhaps this thinking that led Freud to automatically point at genitals (again, the biological makeup) of women as the root cause of their inferiority in his Femininity lecture. Likewise, with The Second s*x, de Beauvoir herself also showed that the biology of women (in this case, their ability to reproduce) played a role in their inferior status of the "Other" in society. Despite taking the biological route, however, both philosophers' theories are indicative of another force that takes precedence in shaping ones s****l life. Freud (albeit indirectly) and de Beauvoir's works show that it is not so much the biological framework of our bodies as the power of society itself that is inescapable. ...read more.

Furthermore, this view automatically puts women beneath men in that Freud seems to be suggesting that women cannot be truly s****l beings. He even regards girls who m********e a lot as "liv[ing] in a masculine way" (Freud, 157). In making masturbation taboo and in expecting women to be less s******y liberated than men, Freud was proving himself to be a product of his society. He automatically assumes that women are innately inferior, which causes him to deduce that the desire for a p***s is one that haunts women for the rest of their lives, even to the point that "they are bound to value their charms more highly as a late compensation for their original s****l inferiority" (Freud, 164). He even goes on to attribute the joy that women felt at the birth of a son to their desire for a p***s, never taking into account the fact that male heirs are needed to continue the family name in patriarchal societies. In this way, it can be seen that Freud never seems to fully take into account that it is the way that society behaves towards both sexes that ultimately determines their status. His obliviousness to these other factors further serves to reflect that society plays a larger role in ones conception of sexuality, to the point that it becomes ubiquitous. Interestingly enough, de Beauvoir also went on to cite the realization of the p***s as an important moment in the development of girls. ...read more.

In this way, it can be seen that de Beauvoir viewed society as a bigger obstacle than biology. While both Freud and de Beauvoir certainly take biology into account, it can be seen that it is in fact society that is truly inescapable. Freud showed this inadvertently in the manner that he argued his case, although it must also be noted that he did actually acknowledge the role of society in the development of ones femininity. However, it was de Beauvoir who took it one step further by explicitly stating the ways in which society affects ones conceptions of femininity and masculinity. While the biology of the bodies that we are born into certainly play a role in who we become, de Beauvoir is instrumental in showing that it is ultimately society that perpetuates the relationship dynamic between different groups of people. However, she was not a pessimist; she did believe that both could be transcended. De Beauvoir even offers a light of hope towards the end, when she speaks of the transcendence that is possible when woman can use contraceptives and abortion, as well as redefining her roes when "she prides herself on thinking, taking action, working, creating, on the same terms as men; instead of seeking to disparage them, she declares herself their equal-" (de Beauvoir, 718) a possibility that Freud may never have foreseen, given that he saw women as indefinitely inferior to men due to their biology. ...read more.