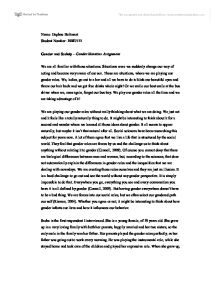 Name: Daphne Holtmaat Student Number: 10087533 Gender and Society - Gender Identities Assignment We are all familiar with those situations. Situations were we suddenly change our way of acting and become very aware of our sex. These are situations, where we are playing our gender roles. We, ladies, go out to a bar and all we have to do is blink our beautiful eyes and throw our hair back and we get free drinks whole night! Or we smile our best smile at the bus driver when we, ones again, forgot our bus key. We play our gender roles all the time and we are taking advantage of it! We are playing our gender roles without really thinking about what we are doing. We just act and it feels like a totally naturally thing to do. It might be interesting to think about it for a second and wonder where we learned all those ideas about gender. It all seems to appear naturally, but maybe it isn't that natural after all. Social sciences have been researching this subject for years now. ...read more.

She grew up in a very loving family with both her parents, happily married and her two sisters, so the only male in the family was her father. Her parents played the gender roles perfectly, as her father was going out to work every morning. He was playing the instrumental role, while she stayed home and took care of the children and played her expressive role. When she grew up, Sacha noticed that her father was very protective over her and her sisters. He always insisted in picking her up from local pubs and work and there was no way that he would let her bike home alone after dark. She always had to let her parents know where she hung out and she always founds that really annoying. Especially when she realizes that the reason why was, because she is a girl. Her male friends, which she had a lot, had a lot more freedom at the time to do whatever they wanted to do and she felt limited in her freedom. They taught her from childhood to be careful and responsible, because young girls or women are very vulnerable. ...read more.

From his perspective who we are as humans, has everything to do with how natures works and how animals live. There is no other way where you can see gender roles appearing so clear. My male respondent sees nature as the perfect example to explain that the differences between sexes are not just created by people, but it shows us who we are. In the world we live in today, it is nearly impossible not to play by the gender roles, whether you like it or not. Even though my respondents have different views about gender, both my respondents agree that gender roles are definitely influenced by the social world were we all in participate. We create our own social world and play it by the rules, as people expect us to. And when it really comes to it, neither one of my respondents see the gender differences as a necessarily bad thing as long as men and women are seen as equal, with equal rights and changes. And playing our gender roles can be a lot of fun and it can have a positive effect on us. ...read more.