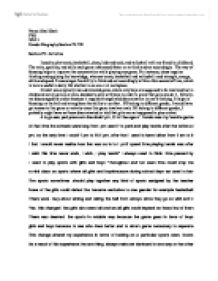 Name: Shail Shah FYS 2/3/11 Gender Biography Section IV-VII Section IV: Activities I used to play tennis, basketball, chess, hide and seek, and volleyball with my friend in childhood. The traits, qualities, and skills each game referenced foster on to think and act accordingly. The way of focusing helps to improve the concentration while playing any game. For instance, chess requires thinking and applying the knowledge, whereas tennis, basketball and volleyball need strength, energy, skills and speed. It encourages the ability to think and act accordingly within a few second of time, which in turn is useful in daily life whether in ex am or at workplace. Cricket was originally man-dominated game, where only boys are supposed to be involved, but in childhood we all girls as a team, decided to play with boys in order to prove that girls can do it. Initially, we discouraged by cricket because it requires strength and determination in one's thinking. It helps in focusing on the ball and strengthens the ability to run fast. If I belong to different gender, I would have got access to this game or activity since this game involves male. If I belong to different gender, I probably might have not been discriminated or told that girls are not supposed to play cricket. Tennis was my favorite game. At the age of 13, my friend and me every day used to go to yard and play tennis after the tuition at 7 pm used. At that time the schools were long from 8 am to 5 pm, after that I used to have tuition from 5:30 pm to 7 pm, so the only time I could spend time playing tennis was after 7pm. I was so in to it that I would never realize how the time passed by. I always used to think "I wish this time never ends, I wish, I play tennis throughout and not even time could stop me." ...read more.

As a female person, I was glad to see how Jacqueline did what she wanted not thinking that being a pilot is only for men. She instead proved these female are not behind, they can also do things if they decide and do with determination and courage. Being a female is equally contributed as being a male. If one thinks everything is possible in life then no matter who they are as a gender can achieve it. The earliest memories involving the interactions or the physical presence of people of the opposite s*x was talking about a MCAT at time of my working schedule at Access Health Center. His name is Nadim who is a POC in charge person. This early memory was about MCAT: how to take and what is the right time to take it. He is studying at UIC and works in POC. He took the MCAT this year and gave me guidance and instruction about how to study for it. The context of this interaction was how to score higher in MCAT and what are the materials that are needed in order to succeed in MCAT. I was at Access Health Center working as a part time on Saturdays. This interaction started by discussing how is his performance at UIC and what are the strategies in order to get into med school. It made me feel that I need to work hard and score high on MCAT in order to secure my place in med school. It is really difficult test and there are others who are competing to get in to the med school. It encouraged me to even work harder and be among the lucky ones to secure the place in med school. This interaction was friendly since he made me understand how difficult it is to enter into Med school for which I have to prepare from now. ...read more.

WOMEN ARE GIVEN EQUAL PRIVILEGE AS WELL AS OPPORTUNITIES AS A MALE ARE. WOMEN ARE STEPPING OUT OF THEIR HOUSEHOLD LIVES AND WORKING HARD PROVING THEIR IDENTITY IN THE SOCIETY. The roles for female who are white are generally taught to be beautiful and given far more advantage due to their appearance then compared to the male who are non white. This role is enforced in daily basis of life whether it is in school, college, work, or in the community. The way people think is based on how they see and what they see. People judge according to the personality and the way one acts not by the inner perspective or the feelings that one has. Critical Analysis The overall message serves how society is constructed which eventually leads a person act accordingly. Society shapes the gender role. Within a dominant institution: family, employment, for example the girls/women who are non-whites are discriminated based on their race and ethnicity. They are not given the privilege that a boy/ men who are whites have. THIS EVENTUALLY IMPACTS HOW ONE IS SEEN IN THE WORKPLACE NOT BY THE SKILLS OR QUALITIES THEY TEND TO HAVE BUT THE FACT THAT THEY ARE NOT TRUSTABLE DUE TO THEIR SKIN COLOR. THE IMPACT IS LIFELONG AND TREMENDOUSLY HEART BREAKING SINCE THEY ARE NOT ONLY REJECTED BY THE INDIVIDUAL BUT BY THE WHOLE SOCIETY IN WHICH THEY TEND TO LIVE IN. THEY GENERALLY GO INTO THE DEPRESSION BY THESE CIRCUMSTANCES. IF THE RACIAL DISCRIMINATION CONTINUES THEN THE DEATH RATIO OF NON WHITE MALE WILL DRASTICALLY INCREASE DUE TO THEIR STRESS OF UNEMPLOYMENT AND ANXIETY. DEFINITELY NOT, BECAUSE THE GENDER ROLE SHOULD BE EQUALLY CONSTRUCTED NOT BY WHERE THE PERSON IS FROM AND WHAT IS THEIR ETHNICITY. EVERYONE SHOULD BE JUDGE BY "WE ALL ARE HUMAN BEING" NOT BY THE COLOR OF THE SKIN OR BY THE RACE. ONE THING COULD BE TAKEN INTO GRANTED THAT IF PEOPLE START BELIEVING THAT WE ALL ARE EQUAL IN TERMS OF HUMAN AND WE ALL PERTAIN THE SAME QUALITY THAT IS WE ARE THE MESSENGER OF THE GOD. ...read more.