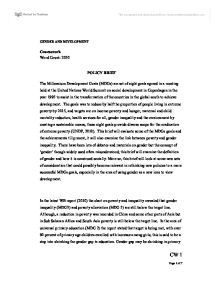 GENDER AND DEVELOPMENT Coursework Word Count: 2050 POLICY BRIEF The Millennium Development Goals (MDGs) are set of eight goals agreed in a meeting held at the United Nations World Summit on social development in Copenhagen in the year 1995 to assist in the transformation of the countries in the global south to achieve development. The goals was to reduce by half the proportion of people living in extreme poverty by 2015, and targets are on income poverty and hunger, maternal and child mortality reduction, health services for all, gender inequality and the environment by creating a sustainable means; these eight goals provide diverse scope for the eradication of extreme poverty (UNDP, 2010). This brief will evaluate some of the MDGs goals and the achievements till present, it will also examine the link between poverty and gender inequality. There have been lots of debates and materials on gender but the concept of 'gender' though widely used often misunderstood; this brief will examine the definition of gender and how it is construed socially. More so; this brief will look at some new sets of consideration that could possibly become relevant in rethinking new policies to a more successful MDGs goals, especially in the area of using gender as a new lens to view development. ...read more.

1993, pp: 16-17). Women has triple role, not only reproductive work, the child bearing and home keeper also secondary income earners in productive work. The role of men and women if examined differently reveals the division of labour on the basis of gender and provides the fundamental principle for differentiating the work that men do and women. This presents the underlying principle for the disparity in the worth placed on their jobs. This accounts for links between genders in division of labour and the subordination of women (Moser, C. 1993, pp: 27-29). The MDGs goals to half world poverty by 2015 has just five years left to achieving this and according to the WB (2010) latest report it projected some setbacks. This brief is proposing a review of policies in the eight international goals of the MDGs which have gender issues cuts across all. The progress of the MDGs will require a coordinated policy approach that is gender sensitive; and a social protection policy that could advance the progress of poverty reduction strategy if imbibed with gender equality programme designed and guided by a clear analysis of gender risks. Holmes and Jones (2010, p.1) suggested that "with strong political commitment, strategic coordination, and long-term funding could achieve real change" (Holmes and Jones, 2010. ...read more.