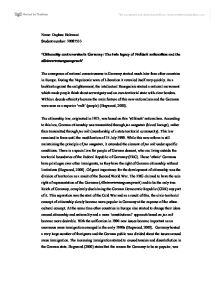 Name: Daphne Holtmaat Student number: 10087533 'Citizenship controversies in Germany: The twin legacy of Volkisch nationalism and the alleinvertretungsanspruch' The emergence of national consciousness in Germany started much later than other countries in Europe. During the Napoleonic wars of Liberation it revealed itself very quickly. As a backlash against the enlightenment, the intellectual Bourgeoisie started a national movement which made people think about sovereignty and an own territorial state with clear borders. Within a decade ethnicity became the main feature of this new nationalism and the Germans were seen as a superior 'volk' (people) (Hogwood, 2000). The citizenship law, originated in 1913, was based on this 'v�lkisch' nationalism. According to this law, German citizenship was transmitted through jus sanguinis (blood lineage), rather than transmitted through jus soli (membership of a state territorial community). This law remained in force until the modification of 15 July 1999. While this new reform is still maintaining the principle of jus sanguinis, it extended the element of jus soli under specific conditions. There is a special law for people of German descent, who are living outside the territorial boundaries of the Federal Republic of Germany (FRG). Those 'ethnic' Germans have privileges over other immigrants, as they have the right of German citizenship without limitations (Hogwood, 2000). Of great importance for the development of citizenship was the division of territories as a result of the Second World War. ...read more.

The aim of the test is to make sure new German citizens have basis knowledge of the German state and history. But as many argued, the test is too hard, as it is not even easy for born-and-bred Germans to pass the test. Restrictions like those declare that Germany is trying to decrease the number of immigrants. Despite all the progress Germany made in the field of nationalism and citizenship rights, the idea of jus sanguinis is very deeply rooted and inextricably connected with concepts as race and ethnicity. Debating sensitive issues around citizenship rights can still be emotionally charged. Especially because it is difficult to ignore history and to avoid taboos as Nazism and racism (Hogwood, 2000). For many decades, including the period after the Second World War, Germany has taken a restrictive, perhaps racist, position (Kesselman, 2009). Till today Germany history has acted as a brake on many issues related to anti-ethnic and nationalism. Many Germans nowadays grow up with the idea that they can't be proud of Germany and the Germany 'volk'. They still feel that they have to be ashamed of what their ancestors did in history and this is a very important aspect of German identity and Citizenship. They almost feel responsible and are therefore careful with restrictions on asylum and immigration law to not give the wrong impression. ...read more.

Former residents of the GDR still have different memories and ideas about German history, than former FRG residents. The unification was suppose to bring prosperity for both parts of Germany. But the integration didn't go as expected, as they didn't take into account the deep mental division. The reunification needed a lot of adaption especially from the former GDR. This division is still noticeable in the different parties representing Germany and although they are making progress, the tensions still exist. The Germans were seen as a superior 'volk' and this 'v�lkisch' nationalism was based on the principle of jus sanguinis. With the division of territories, after the Second World War, the FRG claimed to be the only true German Reich, completely disclaiming the GDR. The unification of Germany in 1990, obviously, leaded to confusion among the German people. With the emergence of the mass immigration in the early 1990s, Germany was more divided than ever and tensions were running high. Lately the hostility in Germany is increased which makes it clear that there still is a problem. Germany needs legal provisions and the German citizens and immigrants need to change their attitudes with respect to each other, to try to decrease the tensions. Together with other ongoing tensions between former GDR and FRG residents, and the effects of the Second World War, Germany has a lot to deal with nowadays. Which makes it clear that Germany just needs a little more time, before they can embrace a multi-cultural Germany. ...read more.