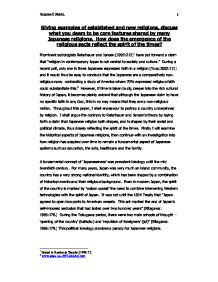 Giving examples of established and new religions, discuss what you deem to be core features shared by many Japanese religions. How does the emergence of the religious sects reflect the spirit of the times?

Giving examples of established and new religions, discuss what you deem to be core features shared by many Japanese religions. How does the emergence of the religious sects reflect the spirit of the times? Prominent sociologists Reischauer and Jansen [1995:215]1 have put forward a claim that "religion in contemporary Japan is not central to society and culture." During a recent poll, only one in three Japanese expressed faith in a religion [Yusa:2002:111] and it would thus be easy to conclude that the Japanese are a comparatively non-religious race; contrasting a study of America where 70% expressed religious faith could substantiate this.2 However, if time is taken to dig deeper into the rich cultural history of Japan, it becomes plainly evident that although the Japanese claim to have no specific faith in any God, this in no way means that they are a non-religious nation. Throughout this paper, I shall endeavour to portray a country underpinned by religion. I shall argue the contrary to Reischauer and Jansen's theory by laying forth a claim that Japanese religion both shapes, and is shaped by their social and political climate, thus closely reflecting the spirit of the times. Firstly I will examine the historical aspects of Japanese religions, then continue with an investigation into how religion has adapted over time to remain a fundamental aspect of Japanese systems such as education, the arts, healthcare and the family. A fundamental concept of 'Japaneseness' was prevalent ideology until the mid twentieth century. For many years, Japan was very much an island community, the country has a very strong national identity, which has been shaped by a combination of historical events and their religious background. Even in modern Japan, the spirit of the country is marked by 'wakon yoosai' the need to combine intervening Western technologies with the spirit of Japan. It was not until the 1854 Treaty that "Japan agreed to open two ports to American vessels. ...read more.

This reduces family-unit disapproval as much as unlike monotheism, they can still attend celebrations and festivals as a household. However, the establishment of 'new' religions has also had advantageous effect on the religious outlook of Japan, for they have provided a challenge to the religions which had been present for centuries, for example, the introduction of the Jodo Shinshu sect by founder Shinran, which was introduced as a confrontation to Buddhist principles. These challenges ensure that all religions in Japan progress with the times or are swallowed by other sects. This is especially true with groups such as Sokagakkai who question political ideology with their political wing Komei. This group has a commitment to anti-abortion, thus housing political and cultural opposition to those religions who admit acceptance of the practice. There is a strong emphasis on individual rights within new religions such as 'Mahikari Kyodan' or 'Kofuku no Kaguku', and provide "a contradiction to the rationalist approach of modern religion" [Sugimoto:2001:235.] Unlike the established religions, which are automatically inherited at birth; these new religions give people the choice to believe. In fact, many scholars such as Thomsen and Van Straelen [as reported in Kitagawa: 1966:220] view these not as 'new religions' but as offshoots from existing ones - thus aptly named 'pseudo-religions.' These pseudo-religions split and merge whenever a need for a new moral outlook is needed. Confucianism, which many Japanese have adopted, whilst being oblivious to its presence, was once hailed as the legal basis of the country. The most important aspect of this legal connection was that of family loyalty and respect, which was why the Tokugawa shoguns applied its theory to the country. Even in contemporary Japan, community ties and loyalty often suppress elemental individualism. "Given Japanese religion's long association with the larger political whole, and the changes in the balance of power between Buddhism and Shinto, as well as amongst different Buddhist sects, it is clear that the meaning of rituals in Japan has often shifted depending on the prevailing norm. ...read more.

No matter what the religion calls itself, be it a past State religion or an adaptation manifesting as a 'new' religion, the effect is the same. The only way it can sustain the cultural philosophy of Japan is by becoming at one with its people. As the people of the nation change, their religion must adapt. This was particularly evident after the second World War when the country was in a state of upheaval and all the 'new' religions appeared to cope with the demand for a meaning to the new style of life. Japanese religion has become entangled so much with the fundamental aspects of everyday life that it is mostly indistinguishable from the cultural, political, economic or social aspects of the countries rich heritage. I will conclude this paper by restating my argument that although there are many religions co-existing on such a tiny island, they all share many fundamental principles, such as the importance of ancestor veneration or the necessity to bond with fellow citizens. These religions are not only a reflection of social change but also a pillar of change within themselves - they shape, and are shaped by the social and political climate of Japan, thus adapting over time to fit the spirit of the country. They emerge from a basal need to correct the shortcomings of existing religious and cultural principles in contemporary life and thus match the spirit of Japan in contemporary society through creation of a new religion or adaptation of an existing religion for that very purpose. The syncretic nature of religion is reproduced throughout Japan within relations between State and individuals and between family units and the individual. Religion has been incorporated into the very fabric of Japanese society, so much so that some religious practices are now seen as cultural tradition and not religious occurrences. Religion links all Japanese institutions together, and therefore does continue to reflect the contemporaneous spirit of the times. 1 Stated in Reader & Tanabe [1998:7.] 2 www.stats_us-1997-262/rel.com 1 Suzanne E Mantz. ...read more.