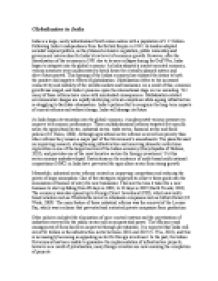 ﻿Globalisation in India India is a large, newly industrialised South Asian nation with a population of 1.15 billion. Following India?s independence from the British Empire in 1947, its leaders adopted socialist inspired politics, as they blamed extensive regulation, public ownership and government intervention for India?s low level of economic growth. However, after the liberalisation of the economy in 1991 due to its near collapse during the Gulf War, India began to integrate into the global economy. As India adopted a market-oriented economy, various measures were implemented to break down the centrally planned system and drive future growth. This opening of the Indian economy has exposed the nation to both the positive and negative effects of globalisation. Globalisation refers to the increased connectivity and mobility of the worlds markets and businesses. As a result of this, economic growth has surged, and India?s presence upon the international stage is ever mounting. Yet many of these reforms have come with unintended consequences. Globalisation-related environmental changes are rapidly destroying critical ecosystems while ageing infrastructure is struggling to facilitate urbanisation. India?s policies fail to recognize the long-term impacts of current reforms and without change, India will damage its future. As India began its transition into the global economy, it implemented various measures to improve its economic performance. ...read more.

These recent developments show that India is still only in the early stages of its integration into the global economy. Following India?s economic transition, economic growth increased, leading to a surge in the demand for goods and services. This led to an increase in the supply, and in turn meant the demand for labour increased. This macroeconomic cycle continued until unemployment fell to a mere 6.8% in 2008 (Earth Trends, 2010). As a result of the GFC, this unemployment has increased to 13%, however as the global economy rebounds from its lows, unemployment is expected to again decline. Structural unemployment has however arisen within India, with certain occupations becoming redundant, while others are simply being replaced as companies utilize the latest technological developments. As seen in figure 1, India has sustained a high rate of annual growth since 1991 of over 6%, and between 2003 and 2009 that figure jumped to 8% (World Bank, 2010). These figures are driven by the services sector, which account for slightly more than half of its total output. India managed to avoid the brunt of the GFC because its primary focuses still lie domestically in agriculture, however it was still impacted upon with GDP growth almost halving from 10% to just over 5%. ...read more.

This project has been driven by the increases in mineral demand, particularly from China. Since 1991, India?s carbon dioxide emission have more than doubled, and now India is the third biggest polluter of carbon dioxide, only behind China and the United States (Earth Trends, 2010). This trend will only increase as the world turns to India as a source of goods and services and, in particular, minerals. These emissions are also being attributed to the recent increases in national disasters with monsoons only becoming more severe. India is still industrialising and its underdevelopment can be seen through the food industry where 40% of all food rots before purchase (M. Wade, 2009). Poor infrastructure and transport systems are seen as the sources of these figures, and as India further liberalises its economy, foreign investment opportunities, particularly in this sector, will only increase. The strategies employed by the government to promote economic growth have succeeded, however their effectiveness in promoting development has been imperfect, with the distribution of income being uneven. Globalisation has come at a cost for many Indians, and without improved policies, the negative impacts of the reforms will have a detrimental effect upon not only future growth, but also future standards of living. ________________ 1. Figure 1: Figure 2: 1. ________________ 1. Figure 3: 2. Figure 4: 1. ________________ 1. Figure 5: 2. Figure 6: 1. ________________ 1. ...read more.