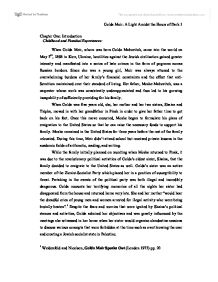 Golda Meir: A Light Amidst the Hours of Dark

Chapter One: Introduction Childhood and Familial Experiences: When Golda Meir, whom was born Golda Mabovitch, came into the world on May 3rd, 1898 in Kiev, Ukraine, hostilities against the Jewish civilization gained greater intensity and manifested into a series of hate crimes in the form of pogroms across Russian borders. Since she was a young girl, Meir was always attuned to the overwhelming burdens of her family's financial constraints and the effect that anti-Semitism maintained over their standard of living. Her father, Moshe Mabovitch, was a carpenter whose work was consistently underappreciated and thus led to his growing incapability of sufficiently providing for his family. When Golda was five years old, she, her mother and her two sisters, Shaina and Tzipka, moved in with her grandfather in Pinsk in order to give her father time to get back on his feet. Once this move occurred, Moshe began to formulate his plans of emigration to the United States so that he can raise the necessary funds to support his family. Moshe remained in the United States for three years before the rest of the family relocated. During this time, Meir didn't attend school but received private lessons in the academic fields of arithmetic, reading, and writing. While the family initially planned on reuniting when Moshe returned to Pinsk, it was due to the revolutionary political activities of Golda's eldest sister, Shaina, that the family decided to emigrate to the United States as well. Golda's sister was an active member of the Zionist-Socialist Party which placed her in a position of susceptibility to threat. Partaking in the events of the political party was both illegal and incredibly dangerous. Golda recounts her terrifying memories of all the nights her sister had disappeared from the house and returned home very late. She and her mother "would hear the dreadful cries of young men and women arrested for illegal activity who were being brutally beaten".1 Despite the fears and worries that were ignited by Shaina's political stances and ...read more.

She was able to inspire her listeners by creating a foundation to which they could relate to. They wanted to be a part of the struggle that these courageous Jewish pioneers took upon themselves in order to establish a land where their people could live free of persecution. Due to her talent and eloquence in public speaking, Golda contributed a great deal of aid to the Pioneer Women through her widespread lectures and educational services to fellow American women. Golda had spent two years working in America and within this short time frame, her name became renowned due to her success in educating and gaining more assistance from women who before her, were unaware and/or indifferent to the circumstances of the pioneer efforts. It was said that "her down-to-earth simplicity, her rock-bottom sincerity, tempered by her warmth and her wit, somehow transformed "speeches" into memorable experiences for her audiences...and transformed thousands of apathetic American women into ardent-and contributing-Zionists".7 In addition to her success in Pioneer Women, Golda was fortunate that her daughter, Sarah, was treated at Beth Israel Hospital and was finally cured of her kidney disease. A resurgence of the disease was a possibility but doctors told her that it could be controlled and cured by special treatment and by placing her on a certain diet. 7 Peggy Mann, Golda: The Life of Israel's Prime Minister (New York 1973) pp.69 A People in Need of Relief and a Woman Willing to Risk It All to Help Them Following her two year service in the United States and the resulting success she had accomplished there, Golda was made a member of the executive committee of the Histadrut called the General Federation of Jewish Labor in Palestine. Within a year, Golda was elected to the position of secretariat of the Executive Committee which indicated a level of leadership within this federal body. The year after that, she was elected to be the Chairman of the Board of Director of the Kupat Holim which was also known as the Workers' Sick Fund. ...read more.

The war ended on October 22nd when the United Nations Security Council issued a cease-fire right as Israel had isolated the Egyptian Third Army and was preparing to destroy it. While the Israeli army considered the war to have been a success on the fields of battle, the country perceived it as a diplomatic failure which resulted in the tremendous loss of Israeli lives with a death count totaling 2,688 soldiers and 7,250 soldiers suffering from wounds and injury. Amidst all the violence and bloodshed, Golda reflected on the masses of Arab tourists whom, under the government of Israel, were granted permission to come at any time to visit their families in the dictated territories and reminded herself that with the peaceful coming and goings of the hundreds of thousands of Arab tourists, peace was certainly still a possibility and should never be given up on. Golda later resigned in 1974 giving way to Yizthak Rabin taking the position as the new Prime Minister of Israel. Chapter Five: Conclusion Golda's Impact on Israel Golda Meir left a lasting impression in Israeli history and the world alike. She has been regarded as one of the world's greatest diplomats. If it was not for Golda, Israel would not have won over the hearts and concerns of its Jewish counterparts abroad and would have suffered without the aid Golda brought back with her each time she took trips to different countries. Golda not only offered Israel comprehensive plans to boost the economy and incorporate the masses of new immigrants into the Israeli culture and community, but she also showed the world that Israel is a peaceful country that longs to create bonds of friendship throughout the world. Golda was both a grandmother to her five grandchildren and a nurturing mother figure to all she came in contact with. Golda had the power to reconstruct the bonds within the inner workings of the Israeli government and facilitate for the creation of amicable relations between Israel and its greatest ally, the United States. ...read more.