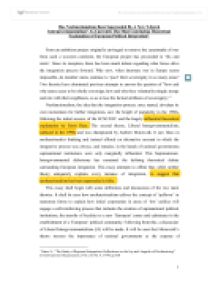 Has Neofunctionalism Been Superseded By A New 'Liberal Intergovernmentalism&quot; As Currently The Most Convincing Theoretical Explanation of European Political Integration?

Has Neofunctionalism Been Superseded By A New 'Liberal Intergovernmentalism" As Currently The Most Convincing Theoretical Explanation of European Political Integration? From an ambitious project originally envisaged to remove the catastrophe of war from such a war-torn continent, the European project has proceeded in 'fits and starts'. Since its inception, there has been much debate regarding what forces drive the integration process forward. Why now, when interstate war in Europe seems impossible, do member states continue to 'pool' their sovereignty in so many areas? Two theories have dominated previous attempts to answer the question of "how and why states cease to be wholly sovereign, how and why they voluntarily mingle, merge and mix with their neighbours, so as to lose the factual attributes of sovereignty."1 Neofunctionalism, the idea that the integration process, once started, develops its own momentum for further integration, saw the height of popularity in the 1960s, following the initial success of the ECSC/EEC and the hugely influential theoretical explanation by Ernst Haas. The second theory, Liberal Intergovernmentalism, surfaced in the 1990s and was championed by Andrew Moravcsik. It saw flaws in neofunctionalist thinking and instead offered an alternative account in which the integrative process was always, and remains, in the hands of national governments; supranational institutions were only marginally influential. This Supranational-Intergovernmental dichotomy has remained the defining theoretical debate surrounding European integration. This essay attempts to affirm that, while neither theory adequately explains every instance of integration, to suggest that neofunctionalism has been superseded is folly. This essay shall begin with some definitions and discussions of the two main theories. It shall be seen how neofunctionalism utilises the concept of 'spillover' in numerous forms to explain how initial cooperation in areas of 'low' politics will engage a self-reinforcing process that includes the creation of supranational political institutions, the transfer of loyalties to a new 'European' centre and culminates in the establishment of a 'European' political community. ...read more.

In 'principle-agent' terms, there exists, according to liberal intergovernmentalists, a 'tight' relationship between the two; the supranational institutions having little autonomy.23 Thus, according to Moravcsik, such institutions are "passive" who have little substantive impact on either policy or the integration process itself.24 This clearly rejects the neofunctionalist premise of spillover, particularly cultivated spillover. In addition, though it was stated earlier that the Commission has played a crucial role in several areas, others have disagreed, suggesting that commission proposals are rarely "pure, spontaneous" actions, but ones made at the behest of national governments.25 Moravcsik re-iterates the liberal intergovernmentalist approach to integration in The Choice for Europe: European Integration resulted from a series of rational choices made by national leader who consistently pursued economic interests...When such interests converged [between states], integration advanced.26 The two main theories of European integration clearly disagree on fundamental issues concerning the relative importance of supranational institutions, but to evaluate whether neofunctionalism has been superseded by liberal intergovernmentalism as the most convincing explanation, it is now necessary to look at four areas of EU integration. This shall begin with two key treaties, where one would expect the intergovernmentalist approach to be of more explanatory value; the Single European Act (SEA) of 1987 and Treaty on European Union (TEU) of 1992 (Maastricht Treaty). Following from this, an area of 'low' politics will be examined, which one may expect to see neofunctionalist arguments more relevant. This shall be done with a brief investigation of the PHARE Programme. How each theory adequately explains for the events surrounding these areas and relevant predictions have been borne out will surely indicate which is most convincing. The Single European Act was signed by the twelve member states of the EEC (which subsequently became the European Community (EC)) in Luxembourg in February 1986. It laid out the timetable for the completion of the single market in Europe by 1992; the removal of barriers to free trade and free movement of labour/capital. ...read more.

It was seen that Moravcsik's theory stresses the importance of national governments at the expense of supranational institutions. According to LI, states are rational actors in international affairs, bargaining with other states and establishing institutions only when in their national interests. Supranational Institutions are seen to be agents of the states, which remain in firm control of both the pace and direction of the integration process. Having discussed the theories themselves, this essay looked at three distinct areas; the SEA, the TEU and the PHARE programme. It was seen how Liberal Intergovernmental principles are clearly visible in the IGCs and negotiations that led to both the SEA and the TEU. However, it was concluded that this was no surprise given that they were intergovernmental treaties. Neofunctionalism was seen to have been at the heart of many of the products of the SEA, even before it was signed. Through the idea of 'mutual recognition', developed in the 'everyday grind' of policy formulation, the single market that the SEA purports to establish was well under way. It was seen how neofunctionalist spillover was at the heart of this process. A similar story was seen with the TEU. Though intergovernmental factors were largely behind the Act itself, the content of the act can be viewed as having developed along neofunctional lines. The PHARE programme of the 1990s again showed how neofunctionalist forces remain at work within the EU, despite Moravcsik's claims. The premise of this essay was that, while liberal intergovernmentalism is a useful tool for analysing the bargaining processes of IGCs and is wise not to overstate the effects of central institutions, the fact remains that these institutions do have an effect. Conversely, while neofunctionalism helps explain the 'behind-the-scenes' process of integration, it does not fully realise the power of member states and the pervasiveness of national sensitivities. Seen together, the two theories are a powerful tool for analysing the European project, but to suggest that neofunctionalism has been superseded vastly over-simplifies a topic deserving of complexity. ...read more.

This essay received a 2.1 according to the submitter. I really hope it was a high 2.1, because I would most likely have awarded this a first. It is extremely well written and structured with a very good degree of evidencing, critical engagement with the literature and independent analysis. It maintains focus throughout which in a long essay is no small achievement. An excellent piece of work.