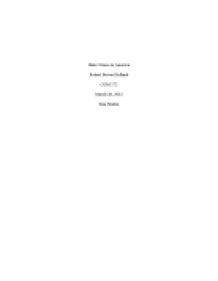 ﻿Hate Crimes in America Robert Bowie Holland COM 172 March 28, 2012 Kim Martin ________________ Hate Crimes in America America is the land of the free, a nation in which any person from any walk of life should be able to come and live in peace, walk down any street in any neighborhood unmolested, something hatred will not allow. Hate-crimes in America come in many colors, races, and religions. One thing, which is certain, no one race color or religion is more hateful for such crimes than the other. Many hate-crimes just seem to be hidden more from view than others, and even interpreted so as not to be a hate crime. According to the Office of Justice Programs, hate-crimes, do not just cause, physical injuries to its victims, the damages to the victims are far reaching, inasmuch as they cause, psychological, and emotional damage to the victims. Fear and humiliation go hand-in-hand with hate-crimes and can also endanger lives of innocent citizens when not properly addressed. Hate- crime offenders commit all types of crime depending, on what motivates the offender. Offenders usually provide evidence that hate prompted their actions, regardless of whether it was a violent crime or even a crime against property. ...read more.

(5) Asian/Pacific Islander account for 0.7% of the known incidents. (6) Unknown races accounted for 10.2% of the known incidents. The "Offenders - Hate Crime Statistics, 2009" (2009) website In 2010 statistics showed that nearly half 47.3% of hate-crimes, were reported as racially motivated, 20% motivated because of religion 19.3% motivated due to sexual orientation and 12.8% were motivated due to ethnicity whereas 0.6% motivated due to disability. Data regarding Hate-crimes comes from two main sources ?The Federal Bureau of investigation (FBI) Uniform Crime Reporting Program and the bureau of Justice Statistics (BJS) National Crime Victimization Survey (NCVS)?. Accurate estimates remain elusive. Unfortunately, data collected by each agency, differs making assessing the prevalence of hate crimes, difficult to predict accurately. ("Hate Crimes In America: The Debate Continues", 2007). Despite the fact that America; has its first African American President, African Americans still seem to be frequent victims of hate-crimes. Hispanics and undocumented immigrants have risen to be by far, one of the easiest targets of hate crimes. ?A report conducted by the ?Southern Poverty Law Center? (SPLC) contends these incidents against Hispanics increased in 2010 for the second year. ...read more.