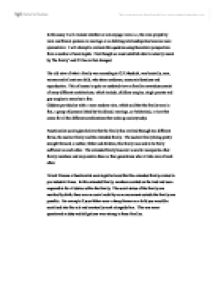 In this essay I will evaluate whether or not conjugal roles i.e.; the roles played by male and female partners in marriage or co-habiting relationships has become more symmetrical. I will attempt to evaluate this question using theoretical perspectives from a number of sociologists. First though we must establish what is actually meant by 'the family' and if it has in fact changed. The old view of what a family was according to G.P.Murdoch, was basically, man, woman and at least one child, who share residence, economic functions and reproduction. This of course is quite an outdated view as families nowadays consist of many different combinations, which include, childless couples, single parents and gay couples to name but a few. Giddons provided us with a more modern view, which said that the family were in fact, a group of persons linked by kin (blood, marriage, co-habitation), a view that caters for all the different combinations that make up society today. Functionalist sociologists believe that the family has evolved through two different forms, the nuclear family and the extended family. The nuclear family being pretty straight forward, a mother, father and children, this family was said to be fairly sufficient on each other. ...read more.

Talcott Parsons believed that the family consists of two irreducible functions, which are functions that the family alone can carry out and cannot be reversed. The first is the socialisation of children. Families take on the role of parents and teach their children through primary socialisation, everything they need to know in order to function in society. Marxists do not disagree that this socialisation takes place, but Eli Zaretsky for example feels that this socialisation is reproducing the next generation of workers with great benefit to the bourgeoisie, and that this subordination to family first, then school will inevitably carry through into work and makes for a capitalist society. The second irreducible function that functionalists believe in is the stabilisation of adult personalities that is achieved through husband and wife relationships. This focuses on the emotional security the couple provide each other in order to counteract the stresses and strains of everyday life. Functionalists believe that the nuclear family has replaced the extended family and that this irreducible function is necessary to the nuclear family as it is largely isolated from wider family groups, so married couples should look to each other for support. ...read more.

Another conflicting theory that Young and Wilmott didn't address was domestic violence. Dobash and Dobash (1980) carried out an extensive study of domestic violence in Scotland. The rather frightening statistics revealed that 25 per cent of all serious assaults were committed by husbands on their wives. One of the main reasons for these physical outbursts was the wife not performing domestic duties to the husband's satisfaction. They also recorded that although many left their homes after assault many were forced to return due to economic dependency. The UN Women's Conference held in 1995 produced documents detailing that women still do two thirds of the worlds work, earn one tenth of the worlds income and own less than one hundredth of the worlds property. This clearly does not indicate conjugal symmetry. A major increase in the number of working women has to some extent increased women's independence and authority within the family. But evidence suggests that even working women still perform the majority of domestic tasks around the home. There does appear to be some role integration relating to leisure activities and decision-making, but housework and childcare are still seen as women's work. So although the functionalist theory may be true to some extent, there appears to be much more evidence to support the fact that conjugal roles aren't symmetrical but in fact still quite male dominated. ...read more.