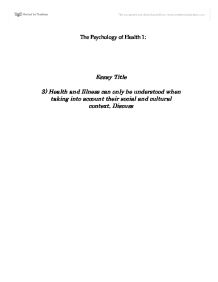 Health and Illness can only be understood when taking into account their social and cultural context. Discuss

The Psychology of Health 1: Essay Title 3) Health and Illness can only be understood when taking into account their social and cultural context. Discuss The definition of the words 'health' and 'illness' can't be taken for granted while they mean different things to different people. Some people who fell able to walk around the house without feeling much pain from arthritis would consider their condition healthy: on the other hand however a person who is in an excellent physical and mental condition wouldn't accept the former as "healthy". It is obvious therefore, the classification of 'illness' is basically contested, that is, there is no agreement about what is considered to be an illness. The World Health Organisation (WHO), for instance classifies health as 'a state of complete physical, mental and asocial well-being, and not merely the absence of disease or infirmity.' Health is a state of complete physical, mental and social well-being is very difficult to achieve according to Banyard (1996). This definition doesn't take into account wider social, political and economic factors. It means that people who are not fulfilled are as well not healthy. Health and illness has to be considered inside a specific socio-political, cultural and interactive background. It is common belief that all can explain what health and illness are, but yet the matter is not as simple as it appears. Cultural context should be taken into account while dealing with health and illness issues. In the past decade the world has undergone vast political, technological, and economic upheavals. The proportion of people who die from infectious diseases has fallen, the proportion who die from cancer and cardiovascular disease has risen. In most countries (with a number of tragic exceptions), life expectancy has risen, the proportion of people over 60 has increased, and the maladies of old age have become more important (Murray and Lopez 1996). From the 17th century to the first decades of the 20th century illness was believed to be unavoidable. ...read more.

In the Western world, evidence-driven changes in our views of the determinants of health have led to greater attention being paid to such risk factors as inequity of income distribution, lack of control (at work and in the community), and social support (Marmot et al. 1997). These changes have enlarged our view of what constitutes health, into areas where medical expertise must negotiate a position with other influential sectors. Classifications might differ by gender and occupation. So the determinants of health could also be these closely related factors: how well you can cope with challenges, in what kind of environment you were brought up and what kind of community support you have For the relationship between social class and health there are five explanations. These explanations are the artefact, social selection, culture, material/ structural and the health services. The first explanation, the artefact explanation, proposes that social class health inequities don't exist in reality. They are only a product of the approaches researchers have used to measure social class and health disparity. The second explanation, the social selection, proposes that bad or good health causes social mobility. The third explanation which is the cultural explanation is the shared and cultured way of life in a group of people. The fourth explanation, which is the material/structural explanation, recommends that social class disparities in health are caused by the dissimilar working and living conditions of the dissimilar social classes. Researchers such as Whitehead (1992) and certainly the Black Report (Townsend and Davidson, 1982), claim that this clarification is essential to an understanding of social class distinctions in health. The cultural explanation implies that different social classes perform in different ways; the poorer health of the lower social classes is caused by the acting in ways that are more likely to damage their health. Alternatively the culture of the higher classes directs to better health and a longer life expectancy. ...read more.

Within any community, each group usually has varying perceptions of illness; some depend on age, gender, culture ethnicity, religion and social rank-. A late study was conducted on children and the way they are able to recognize and experience illness and medical treatment. The research suggests that children do have their own unique understanding of illness, the factor that causes it and the way it should be treated; they guess how and why it has happened to them, The European union carried out a study between 1990-1993 on children 7 to 12 years old. The research was the COMAC Childhood and Medicines Project (Trakas and Sanz 1996, Bush, Trakas & Sanz 1996); it was carried out in nine European countries and examined children's experience of illness and medicines. One of the research methods included a drawing-interview. At this method children had to draw of the last time they were ill and then to talk and answer to questions about the meaning of their drawing. The results were interesting because they had both differences and similarities among different countries. The way children understood illness was very different from one country to another. The factors of culture played a very important in this study. Nearly in all cases, children stressed the key role their mother played as the main care-giver. If we look in Botsis and Trakas's study (1996) in Athens, Greece, we will see that most of the kids had drawn their mothers 'serving hot tea, asking others if they wanted fresh juice, carrying thermometers and arranging flowers'. It was noticeable that fathers were very rarely anywhere in the drawing. A study that took place in Spain had similar results. The explanation they could give to the results of the researches were that children had been greatly influenced by the world of the adults and had assimilated most of their culture and habits. As it has been shown in this essay, to understand health and illness, their social and cultural context should always be taken into account. ...read more.