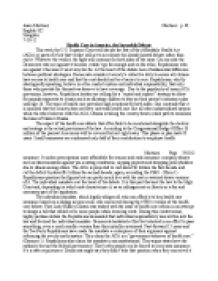 ﻿Jason Martinez Martinez p. #1 English 102 Slaughter 7-10-12 Health Care in America, the Incurable Debate This week the U.S. Supreme Court will decide the fate of the Affordable Health Act (ACA) or parts of it but that verdict will act to accelerate the already heated debate rather than end it. Whatever the verdict, the fight will continue for both sides of the issue. On one side the Democrats who are against it because it didn?t go far enough and on the other, Republicans who are against it because it went way too far. At the heart of the debate lies a fundamental difference between political ideologies. Democrats consider it society?s collective duty to ensure all citizens have access to health care and that the cost should not be a barrier to care. Republicans, strictly ideologically speaking, believe in a free market system and individual responsibility, that only those who provide for themselves deserve to have coverage. Due to the popularity of many ACA provisions, however, Republican leaders are calling for a ?repeal and replace? strategy to allow for popular segments to remain such as allowing children to stay on their parent?s insurance plan until age 26. The topic of health care provokes high emotions for both sides. ...read more.

In addition, a 10 percent tax on tanning salons will be imposed. The Medicare Payroll Tax will include unearned income as well as earned. About half a billion dollars in Medicare savings would also help pay for the law. (Jackson, Nolan 3). Republicans have created their argument to combat this provision as cutting Medicare to seniors to provide health care for those who won?t get a job and pay for their own insurance. The law proposes to save half a trillion dollars by cutting waste and fraud within the Medicare system, a proposal used as a centerpiece of John McCain?s 2008 run for the presidency and a proposal widely applauded by Republicans just four years ago. During the campaign, Democrats cautioned against Medicare cuts McCain was suggesting, that it might affect senior?s access to health care and now it?s the Republicans turn. These Medicare cost savings are a must to make the Affordable Health Care Plan affordable enough to be implemented without raising the National Debt. ?Repealing the $500 billion in savings in Medicare that are in the bill, which reformers insist is the nation?s best hope for making the program more cost-effective while providing better care, would leave a gaping hole in the budget that would have to be filled with either alternative cost efficiencies or the total elimination of the expansion of coverage.? (Goozner 2). ...read more.

Among independents, about two-thirds oppose much of it but one-third wanted more. Democrats are evenly split. ?If you add the people that oppose it because they think it doesn?t go far enough, you get a majority of Americans, so it doesn?t mean that health care reform is dead.? (Zengerle 2011). Health care reform is literally a life and death issue both for people and the economy. The present system, prior to the full implementation of the ACA, is costing citizens their health and contributing to the National Debt. Something must be done. If not the ACA then what? If the country is waiting on Republicans to fix the system they have a long wait. Health care is not their priority as evidenced by the previous administrations complete failure to address the topic at all. It is difficult for Washington to tackle a complex issue such as health care and seldom politically advantageous. The Democrats tried but failed during the 1990?s and have tried again, each time struggling to pass a bill against a determined and organized campaign to defeat it, a campaign of obvious lies and propaganda, the ?death panels? to kill your grandmother misinformation for example. Because of this scare tactic and others, health care reform so essential to people and the nation may again go down in defeat, perpetuating the only option of waiting for another Democratic administration to try yet another time. ...read more.