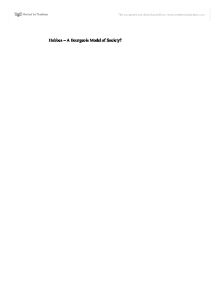 Hobbes - A Bourgeois Model of Society? An evaluation of C.B.MacPherson's criticism of Hobbes Hobbes nevertheless ... built his whole system on deductions from a model of man and a model of society which were, ... models of bourgeois man and capitalist society."1 C.B. Macpherson was a Canadian political philosopher who searched for a better model of society than that which he believed existed in the liberal democracies of the world. These democracies, he suggested, had become removed from true democratic principles by the cogency of the temptations provided by capitalism to the individual. "Almost everything he said was in relation to possessive individualism"2 - and his introduction to Hobbes Leviathan was clearly given over to this perspective. The purpose of this essay is briefly to give account of Hobbes' view of the political and social nature of man, and then to evaluate the analysis of this view provided by C. B. MacPherson. In particular, one of MacPherson's conclusions: that although Hobbes' model of society could only be defined as a capitalist model, the bourgeoisie were not willing to embrace Hobbes and accept his theories, will be examined. ...read more.

Such sovereign power would be best vested in a single person although Hobbes admitted that a group or body of men would also be capable of performing the role. In either case Hobbes believed that the sovereign body must have the ability to choose its successor without further reference to the contractors.12 Further, the contractors would also owe allegiance to the sovereign for as long as (and no longer) it was able to protect them and maintain their way of life.13 Although Hobbes did not claim that seventeenth century England was living in a state of nature, he did believe that his theory proved the need for the existence of state authority and best of all a single sovereign whose power was neither god given nor dependent on the changing views of individual members of the society. This was a formula that was likely to displease both king and parliament (and, MacPherson argues,14 the bourgeoisie) equally. In his introduction to Leviathan, MacPherson demonstrated how he believed that the model of society that Hobbes built is, characteristically, bourgeois and individualist,15 and, further, that it could only be such. ...read more.

Why should they commit themselves to a 'locked' society when by a series of shorter-term administrations they could hope to achieve the power to mould that society to their own model? Of course this is an extremely good point but it does not explain why, when (as MacPherson himself pointed out) the bourgeoisie attained a sovereign Parliament largely controlled by themselves in 1689,25 they did not embrace Hobbes wholeheartedly. If Hobbes was a 'child of his time' then so too was MacPherson. Writing at a time when the cold war was it its zenith, and supposedly Marxist societies were becoming as powerful as their capitalist counterparts, MacPherson may be forgiven for believing that a more socially supportive type of society may have been about to develop. He concludes his introduction to Leviathan by saying: "Hobbes built better than he knew, and better than most of his modern critics know. If his prescription has run out, it is only because bourgeois society, after three hundred years, is no longer self-renewing."26 Perhaps, with the end of the cold war, the global economy and international terrorism, Hobbes built better than even MacPherson realised and his prescription is still good. ...read more.