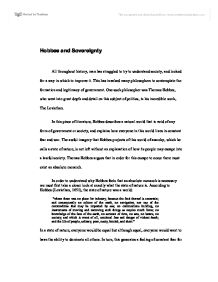 Hobbes and Sovereignty All throughout history, man has struggled to try to understand society, and looked for a way in which to improve it. This has invoked many philosophers to contemplate the formation and legitimacy of government. One such philosopher was Thomas Hobbes, who went into great depth and detail on this subject of politics, in his incredible work, The Leviathan. In this piece of literature, Hobbes describes a natural world that is void of any form of government or society, and explains how everyone in this world lives in constant fear and war. The awful imagery that Hobbes projects of this world of anarchy, which he calls a state of nature, is not left without an explanation of how its people may escape into a lawful society. Thomas Hobbes argues that in order for this escape to occur there must exist an absolute monarch. In order to understand why Hobbes feels that an absolute monarch is necessary we must first take a closer look at exactly what the state of nature is. According to Hobbes (Leviathan, 1651), the state of nature was a world: "where there was no place for industry, because the fruit thereof is uncertain; and consequently no culture of the earth, no navigation, nor use of the commodities that may be imported by sea; no commodious building, no instruments of moving and removing such things as require much force; no knowledge of the face of the earth, no account of time, no arts, no letters, no society; and which is worst of all, continual fear and danger of violent death; and the life of people, solitary, poor, nasty, brutish, and short." In a state of nature, everyone would be equal but although equal, everyone would want to have the ability to dominate all others. In turn, this generates a feeling of constant fear for survival making people violent and threatening on a continual basis. In other words, survival, or self-preservation, is the main driving force of all human beings. ...read more.

Again, Hobbes is accurate only due to the assumption, that a monarch is incapable of being a tyrant. Without this assumption, civil war would be imminent. The power l**t and warmongering of a tyrannical sovereign would most assuredly result in the rebellion against the government, who would defend themselves by use of the royal army. Another criticism that Hobbes receives on the debate of whether or not a single monarch should be the preference to a party government, is how valid the legitimacy of the right to govern is in a monarch system. Hobbes believes that an absolute sovereign is perfectly legitimate in governing his people on the basis that the people chose him, did so freely. However according to Hobbes, acquiring sovereignty through force was also possible, which is contradictory to both this argument of legitimacy of power and to the question of whether a sovereign could be a tyrant. If the acquisition of sovereignty were due to the free selection of the people then the right to govern is legitimate, so long as the people continue to choose new sovereigns. There is some validity to the preference of a single monarch. Although Hobbes theory may technically work with a group or party in power, it would most definitely have major problems. The first being that all sovereigns remain in a state of nature. Although group members, would be expected to give up their rights to the group, it is highly unlikely that there would not be a struggle for dominance within it, (as previously mentioned). This struggle would result in corruption, assignation, absence of cooperation and a return to the state of nature within the government. This in turn would transport all of society back into a world of anarchy. By also having a party government, a problem of forming the group becomes a concern. The people of whom it will have to govern must lay all their rights and liberties down to the group and its members. ...read more.

In the end, it is the relentless drive for self-preservation, which will make the sovereign work around the will of the people. If the sovereign does not work around this issue, he drastically runs the risk of a rebellion. If too many people felt the need to protect themselves from the sovereign, they would eventually join, together to combat the tyranny of the monarch and his army. The very fact that this makes the sovereign a tyrant is contradictory in itself, to Hobbes belief that a monarch would never receive this title. Therefore, the sovereign does not have absolute power to wield freely. He must be careful not to upset, or rile his people too much, and this gives the people some power and control. Although traces of many of Hobbes ideas can be found today in the modern world, his need for an absolute sovereign is most definitely not one of them. Even in Hobbes time, the need is not that strong, or at least not in the way, that he describes it. He poses many contradictions and problems with his theory of a monarch rising out of a state of nature, to deliver his people to peace. Everything about the sovereign would eventually lead back to a world of no peace. That is to say, through his quest for self-preservation against other sovereigns and against his own people, and in upholding his own law, society would begin to fall and revert back to violence. Even this is based on the assumption that a sovereign could be initially chosen at all, which he simply could not. Hobbes does make some good points on the fact that man needs some form of leadership, that is not tyrannical and that the people can put their faith in to deliver them to peace. Unfortunately, the elaborate sovereign that he portrays in the Leviathan could simply not be that leader. Therefore, while Hobbes did contribute to the world of political philosophy, he failed to bring the people in a state of nature a need for an absolute sovereign. ...read more.