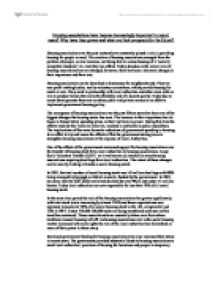 Housing associations have become increasingly important in recent years? Why have they grown and what are their prospects for the future? Housing associations over the past century have constantly played a role in providing housing for people in need. The creation of housing associations emerged from the problem of people, on low incomes, not being able to access housing of a 'socially acceptable standard,' at a rent they can afford. Today decades on the overall aim of housing associations has not changed, however, there has been a dramatic changes in their importance and their size. Housing associations can be described as businesses for neighbourhoods. They are non-profit-making bodies, run by voluntary committees, which provide housing for rental or sale. They work in partnership with local authorities and other areas with an aim to produce homes that are both affordable and of a decent quality. Today due to recent developments they now combine public and private money in an effort to implement government housing policy. The emergence of housing associations over the past fifteen years has been one of the biggest changes the housing sector has seen. ...read more.