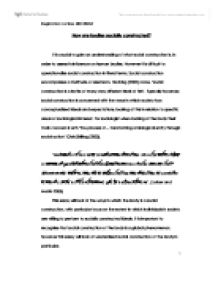 How are bodies socially constructed?

note 'Bodies have become the ultimate vehicle for writing ones identity.'; this looks at anything from the clothes and makeup an individual wears, to self decoration through tattoos, piercings and cosmetic surgery. It is questionable to what extent women 'self decorate' in order to fit the stereotypical views of social expectations of what is 'beautiful', or to oppose these views of conventional attractiveness, both however implicitly relate to the body as a social construction, either in a way that conforms to, or rebels against ideas of socially constructed beauty. Sexuality is closely linked with that of the female body, with socially constructed expectations of s****l femininity, 'Women are expected to be nuturant and emotionally giving, willing to subordinate their own desires to please men and their own interests to take care of children, Therefore women's bodies should be yielding and s******y appealing to men when they are young and plumpy maternal when they are older.' (Kivisto 2005). This mass of generalizations, and assumptions, (that women are heterosexual, that all women want children, that women will forget about their own pleasures to please men), highlights the typical socially constructed views of western culture. It is therefore important to notice a change in women's s****l role through feminist ideas which reflect a modernized culture, with a new type of woman emerging in the 21st century. ...read more.

In a bid to maintain the socially constructed body which is considered attractive, characteristically one of youthfulness, merchandise, such as hair colouring products, anti-wrinkle creams and an increased number cosmetic surgeries can be seen to be endorsed by the older generation, (Craig Thompson 1995). Traditionally much theoretical focus on the social constructions of body, has been on that of femininity; however the social constructions of masculinity can be considered similarly, 'western societies expect men to be aggressive initiators of action and protectors of women and children, therefore their bodies should be muscular and physically strong', increasingly 'Men life weights, get hair transplants, and undergo cosmetic surgery to mould their bodies and faces to a masculine ideal' (Kivisto 2005) This observation of men in the 21st century shows masculinity of the body to be concerned with that of aesthetic pride in a similar way to women, however there is less pressure on the male community to fit the mould of these constructed ideals. A modernised new man is also represented to fit the ideas of social construction, with the coinage of the phrase 'heterosexual male' to highlight the increased notion of male grooming as acceptable in society. Inevitably this essay only looks at a small spectrum of the features that contribute to the body as a social construction, however a lot can be seen on how the body is effected by the views of society, a body which conclusively is not only 'biologically constructed' but also socially. ...read more.